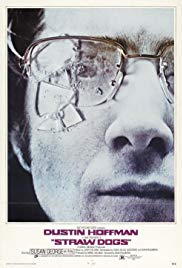 Storyline:
Upon moving to Britain to get away from American violence, astrophysicist David Sumner and his wife Amy are bullied and taken advantage of by the locals hired to do construction. When David finally takes a stand it escalates quickly into a bloody battle as the locals assault his house.
Written by
Andrew Hyatt <[email protected]>
User Reviews: Peckinpah’s post- ‘Wild Bunch’ movies were a mixed bag. Frequently battling studios, censors and/or his own demons, some are genuine classics (‘..Alfredo Garcia’), some are entertaining potboilers (‘The Getaway’), and some like ‘Straw Dogs’ are in between. I could never argue that this movie is his best work, but it is far from his worst, and whatever you can say about his movies, they are ALWAYS interesting.

‘Straw Dogs’ is the closest he came to making a genre horror/thriller movie. If you enjoy ‘Rio Bravo’-inspired siege movies such as Romero’s ‘Night Of The Living Dead’ or Carpenter’s ‘Assault On Precinct 13’, check this one out. But it is more than "just" a thriller – it features strong character development, and morally ambiguous situations among the tense build up to the explosive climax.

In these P.C. times ‘Straw Dogs’ offers no simple answers, but plenty of issues for discussion, and it is to be commended for that. "Right" or "wrong"? YOU decide!