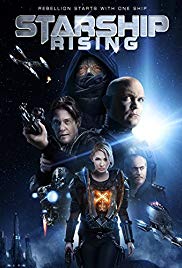 Storyline:
Starship One… the most powerful prototype warship in the Federation, capable of destroying entire worlds. Two empires at war: the corrupt Federation, and the oppressive Terra Nostra. Entire planets are being wiped out. When the order is given to destroy the Earth, Federation Flight Lieutenant John Worthy kills his superior officer and mutineers Starship One. Demanding that both sides make peace, he becomes the target of both sides of the war. Worthy is pursued across the galaxy by General Gustav, an infamous military commander who brings the entire Federation fleet down upon Worthy and his Starship. After a number of intense battles, and suffering heavy vessel damage, Worthy aligns himself with an underground rebellion. He is entrusted with vessel upgrades and a robot army he needs to bring down both sides of the war. Joining with other disgruntled Federation military personnel, and Jolli, a beautiful gun-toting star pilot, Worthy wages war, but is halted when General Gustav holds …
Written by
Neil Johnson
User Reviews: Somewhere right now Roger Corman is practicing rolling in his grave.

wasted or spoiled food and other refuse.

…and now a recipe for Corned Beef Hash:

1 Heat butter in a large skillet (preferably cast iron) on medium heat. Add the onion and cook a few minutes, until translucent.

2 Mix in the chopped corned beef and potatoes. Spread out evenly over the pan. Increase the heat to high or medium high and press down on the mixture with a metal spatula.

3 Do not stir the potatoes and corned beef, but let them brown. If you hear them sizzling, this is good. Use a metal spatula to peek underneath and see if they are browning. If nicely browned, use the spatula to flip sections over in the pan so that they brown on the other side. Press down again with the spatula. If there is too much sticking, you can add a little more butter to the pan. Continue to cook in this manner until the potatoes and the corned beef are nicely browned.

Serve with fried or poached eggs for breakfast.