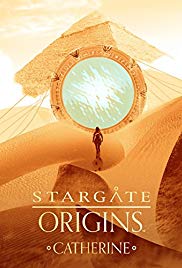 Storyline:
In 1939, Professor Paul Langford and his daughter Catherine are still grappling with the mysteries of the ancient relic they discovered in the Egyptian desert more than ten years ago. With war looming in Europe and funding running out, these brilliant minds are approaching their lowest ebb. Little do they know, answers are about to present themselves in a dangerous form, when the Nazi Occultist Dr. Wilhelm Brücke approaches their facility with a sinister motive. Enlisting the help of two young soldiers, Catherine must use all of her wit and nous as she and her new allies embark on an adventure into the unknown to rescue her father, and save the Earth from an unimaginable darkness.
User Reviews: I will start off with Ellie Gall as Catherine.. She utterly destroyed the experience for me. It is not my intention to attack her personally, we all have qualities in life and I really suck at acting…so does she! She simply should not be in this industry. She didn’t fit, her acting was really bad and her behavior was just annoying. I do not want to she her again, especially not in any Stargate productions.

Which brings me to this production. As a science fiction fan I liked this low budget movie. It was reasonable and despite of Ellie Gall I enjoyed it.

Though.. as a big time Stargate fan.. i really didn’t like this for what it stands for. It stands for a REBOOT of the franchise, it stands for corrupting, changing and even destroying what has been created so far. The lore and duration of the franchise so far has been so very much successful and has such a big following that this nonsense really is not needed. Just continue with the universe as it is, there is so much that can be done with it..

Quite some people were not able to enjoy Stargate universe for example and for those the general opinion is that it was too slow, to emotional to dramatic. With some simple and fun changes that can be dealt with! Re-open that extremely cool concept, make it a bit more faster, keeps some drama but keep it lighter but the keep the rich lore of the existing universe intact! The ancients and the journey through the universe can be written so well. Anyhow, that is just my 2 cents on the subject.

Storyline:Magazine photographer Alex Anderson and author Colin Page head to Fiji in search of the illusive blue pearl that Colin wrote about in his bestselling novel Pearl in Paradise. Alex stands to land the creative...

Storyline:On LA’s Skid Row, a criminal court judge organizes a running club comprised of homeless, recovering and paroled men and women who seek to rediscover their sense of self-worth and dignity.User Reviews:

Storyline:When Miranda Chester sets off to find information on her biological father two Christmases ago, she never imagined her investigation would lead her to both the love of her life, Ian McAndrick, and the family...

Storyline:Grace Manning is in the middle of her quarter-life crisis, realizing she is in over her head as CEO. To make matters worse, her wild-child ways are causing the company’s stock to plummet. With the help of he...

Storyline:When Janet Graham tries to reconnect with her crazy family during their annual spring-time Christmas celebration, she winds up being framed for her fathers' murder. When her family decides to wait until afte...