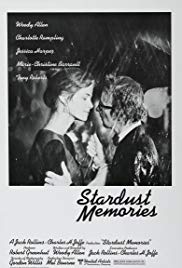 Storyline:
Renowned filmmaker Sandy Bates is in a professional transition, directing largely comedies early in his career now wanting to direct more serious movies so that he can explore the meaning of life, most specifically his own. Most are fighting him all along the way, including the movie going public, who continually tell him that they love his movies especially the earlier funny ones, to studio executives who are trying to insert comic elements wherever possible into his current movie in production. He reluctantly agrees to attend a weekend long film festival of his movies. Despite the throng of requests for his time, he is further able to reflect on his life as he addresses the questions at the post screening Q&A sessions. He also reflects specifically on his love life as his current girlfriend, married Isobel, shows up unexpectedly, and as he starts to fall for festival attendee Daisy – at the festival with her Columbia professor boyfriend, Jack Abel – who reminds him of Dorrie, a …
Written by
Huggo
User Reviews: The problem with Woody has always been that everyone takes his movies more seriously than he does. Here, using the tactics of Felini, he makes fools of his detractors including the greatest detractor of all, Woody himself. For many reasons, I rank this among his best. He removes the restraint of plot, and just goes balls out nuts with his usual philosophical angst, and endless worship of beautiful dames. Oddly enough, without the fetters of convention, to me it was actually less pretentious or indulgent I think people like to call it, and a lot easier to understand and empathize with. One thing that I’ve always found absurd, and ironically what this film dwells on, is the complaints by fans and critics that he should go back to making comedies. Woody cannot not make a funny movie. If he’s in it, and he’s talking, I’m laughing. Especially back in this era, when his jokes were so fresh. So make no mistake, this film is loaded with comedy. Finally, I liked his choice of women in this. Charlotte Rampling is what I suppose the word breathtaking was originally meant to describe. If you arent touched by the final scenes with her, you got issues.