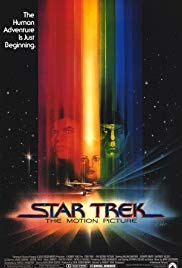 Storyline:
A massive alien spacecraft of enormous power destroys three powerful Klingon cruisers, entering Federation space. Admiral James T. Kirk is ordered to take command of the USS Enterprise for the first time since her historic five-year mission. The Epsilon IX space station alerts the Federation, but they are also destroyed by the alien spacecraft. The only starship in range is the Enterprise, after undergoing a major overhaul at Spacedock on Earth. Kirk rounds up the rest of his crew, and acquires some new members, and sets off to intercept the alien spacecraft. However, it has been three years since Kirk last commanded the Enterprise – is he up to the task of saving Earth?
Written by
Colin Tinto <[email protected]>
User Reviews: I’ve heard George Lucas talk about the change of pacing between films of the 1970’s and of films now. He talked about how the pacing of the first Star Wars film was considered rapid at the time but by today’s standards, pretty slow. I feel the same can be said about the first Star Trek film (The Motion Picture). The first hour of this film is quite a drag. The special effects are dated, but sometimes that can be forgiven if the story around it is epic (Original Star Wars). The story for this film is embroiled in mystery as we don’t even know who or what the villain is for close to an hour and a half.

Overall, I think I can say I enjoyed watching Star Trek: The Motion Picture as it brings back all of the same characters and dynamics from the original series, but the story dragged and I don’t feel like this was the particular plot they should have revolved the first feature film around.

The enterprise this time is investigating an alien spacecraft that gets mysteriously close to earth, known as V’Ger. Captain Kirk returned back to his position as head of the Starship Enterprise. Kirk replaced the new head of the enterprise, Decker. Obviously, you know that the dynamic between the two will have plenty of tension knowing there’s two captains in the same ship, but it doesn’t go to the extent that a normal Hollywood film would do.

Yes, the tone and feel of the film is the same as the series but I think it was lacking the magic. There’s a lot of time in the film spent on showing the numerous special effects shots and set pieces they created for the film. With that said, I don’t feel like there was enough time spent on character development for people who didn’t know the characters from the TV show.

It’s not that Star Trek: The Motion Picture isn’t a good entry in the series, it’s just that there’s merely nothing special at all about the film. Its constantly told to us that this mission is to save the entire human race and has a huge scope, but we don’t really see that being played out. I liked the ending reveal involving V’Ger, but it didn’t save the film from being an average entry in a history franchise.

+Same feel as the series

Storyline:The infamous World War II cat house, The Pink Flamingo, is the setting where Frances, the warm-hearted madam, caters to the sex starved servicemen. Includes nostalgia, via the sets and period music, and a st...

Storyline:The story of CARGO takes place on rusty space-freighter KASSANDRA on its way to Station 42. The young medic LAURA is the only one awake on board while the rest of the crew lies frozen in hibernation sleep. I...