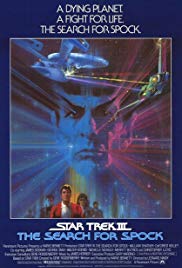 Storyline:
In the wake of Spock’s ultimate deed of sacrifice, Admiral Kirk and the Enterprise crew return to Earth for some essential repairs to their ship. When they arrive at Spacedock, they are shocked to discover that the Enterprise is to be decommissioned. Even worse, Dr. McCoy begins acting strangely and Scotty has been reassigned to another ship. Kirk is forced to steal back the Enterprise and head across space to the Genesis Planet to save Spock and bring him to Vulcan. Unknown to them, the Klingons are planning to steal the secrets of the Genesis Device for their own deadly purpose.
Written by
Colin Tinto <[email protected]>
User Reviews: The even numbered "Star Trek" movies (parts 2, 4, 6, 8) have turned out to be the best in the series while the odd numbered ones (parts 1, 3, 5, 7, 9) are the weaker films even though some of the odd numbered ones are pretty good. "Star Trek III: The Search for Spock" is, in my opinion, the best odd numbered movie in the series to date. If you recall at the end of "Star Trek II", Mr. Spock (Leonard Nimoy) gave his life to save his friends. His coffin was shipped off to the Genesis Planet, an experiment co-created by Kirk’s son David. "Star Trek III" opens with some of this footage from the previous film. As the new scenes begin, the Enterprise crew is on their way home. But weird things start happening. Dr. McCoy (DeForest Kelley) begins to act strange, and a lifeform has been discovered on the Genesis Planet. Is Spock really dead? Is Dr. McCoy going insane? Admiral Kirk (William Shatner) discovers that before his demise Mr. Spock implanted some of his mind into Dr. McCoy, which explains why he’s been acting unusual. Spock’s father Sarek tells Kirk that he must find Spock’s body in whatever condition it’s in if there’s any chance for Spock and McCoy to have peace. And what follows is a very exciting adventure. In addition to finding Spock, the Enterprise crew must do battle with their most lethal enemy, the Klingons, who’s leader (Christopher Lloyd) wants the secrets to the Genesis Project. As far as how good this film is, "Star Trek III: The Search for Spock" is just a few notches below "Star Trek II". The story could have used a little tightening and it’s a little slow in the first half. But then the film picks up the pace with a thrilling second half. Will Spock be rescued? By now I think everybody knows the answer to this question. Leonard Nimoy made his directorial debut with "Star Trek III: The Search for Spock" and did a very good job (he did an even better job on the next film "Star Trek IV: The Voyage Home"). "Star Trek III" has all the other elements as well: action, special effects, and performances, all above average. The cast does a good job as usual. Shatner, Kelley, and the rest of the Enterprise crew are back in good form. Lloyd is an exceptional villain here. Look for a pre-"Night Court" John Larroquette as a Klingon. "Star Trek III: The Search for Spock" is a fun movie, which was a perfect set-up for the next "Star Trek" adventure.

Storyline:Three actors portray scenes from the life of Sterling Hayden, with a particular focus on his appearance before the House Un-American Activities Committee. Inspired by Hayden’s memoir “Wanderer.”User Reviews:

Storyline:An ancient urn is found in a cemetery outside Rome. Once opened, it triggers a series of violent incidents: robberies, rapes and murders increase dramatically, while several mysterious, evil-looking young wo...

Storyline:Three ad agency executives are pressured into taking a motorbike trip to Baja by a big-ticket client. Along the way, the client is spurned by a young woman whose boyfriend sticks up for her. The client later...