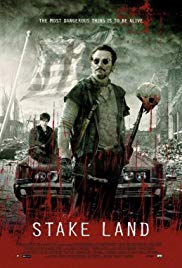 Storyline:
Martin was a normal teenage boy before the country collapsed in an empty pit of economic and political disaster. A vampire epidemic has swept across what is left of the nation’s abandoned towns and cities, and it’s up to Mister, a death dealing, rogue vampire hunter, to get Martin safely north to Canada, the continent’s New Eden.
Written by
Anonymous
User Reviews: I saw this movie because I love post-apocalyptic movies. The idea of a world with less human beings meddling with it always looks enticing. Its the same reason why we take vacations in remote locations.

First thing you will notice about Stake Land is it looks great. I am not much familiar with the cast except Connor Paolo. The actors act naturally which looks great in a film such as this. The plot is simple. It is a story of survivors of a vampire epidemic. But its the execution of the plot which is why this movie is so good. The director knows what he can and cant do. 10 out of 10 for the director’s efforts.

Lastly, I wont say its a different movie than the rest of vampire movies coming out these days. But Stake Land should be watched because it has the ability to suck you in its environment within the first 10 minutes. And trust me it never lets it go.

Storyline:Saxophone player Charlie "Bird" Parker (Forest Whitaker) comes to New York City in 1940. He is quickly noticed for his remarkable way of playing. He becomes a drug addict, but his loving wife Chan (Diane Ven...

Storyline:Two London brothers are hard-up for cash, and both have girls to look out for, too. When rich Uncle Howard comes to town and agrees to help them out, he admits his finances are under investigation, and he as...

Storyline:Zona Libre is a small enclave across the river from America. Despotically ruled by General Calleja, it offers sanctuary to outlaws, at a price. Newly arrived is Clete Mattson who has $2million in gold to buy...

Storyline:In Talbot, Ohio, a father's need for surgeries puts the family in a financial bind. His son Vince, an electrician, overhears a man talking about making a fortune in just a day. When the man overdoses on drug...