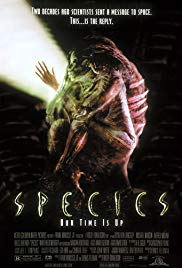 Storyline:
In 1993, the Search for Extra Terrestrial Intelligence Project receives a transmission detailing an alien DNA structure, along with instructions on how to splice it with human DNA. The result is Sil, a sensual but deadly creature who can change from a beautiful woman to an armour-plated killing machine in the blink of an eye. Government agent Xavier Fitch assembles a team of scientists and mercenaries to locate and destroy Sil before she manages to find a mate and breed.
Written by
Alexander Lum <[email protected]>
User Reviews: Some scientists working for the government tamper with a DNA sequence they got from a message from outer space. The subject turns into a little girl with amazing superhuman powers. She escapes and turns into a beautiful woman (Natasha Herstridge) who wants to mate and produce others like her. A team led by a head scientist (Ben Kingsley!) try to track her down.

OK–it’s kind of silly but this moves quickly and is well-done. There are many excellent, if gruesome, special effects and the SIL creature at the end is truly astounding. The script is good (considering) and it actually makes sense…if you don’t think about it too much.

Acting varies–Kingsley is TERRIBLE in his role. Michael Madsen is pretty good as part of the team as are Marg Helgenberger and (especially) Forest Whitaker. Herstridge is certainly beautiful but can’t act–but the role doesn’t call for acting.

I’m giving it an 8. It’s no classic but it moves quickly and I was never bored.