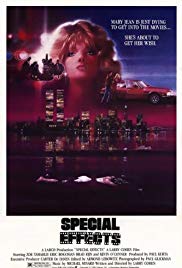 Storyline:
Reality and illusion collide in this thriller about a megalomaniacal movie director who murders a young would-be actress, then sets about making a feature about the deed, casting the dead woman’s clueless husband as the patsy, and finding a dead ringer to play the part of the dead actress.
Written by
Eugene Kim <[email protected]>
User Reviews: It seems like Larry Cohen was trying to emulate DePalma with this ambitious, but poorly realized knock off of "Body Double." Some nice sets and decent shots cannot change the fact that Zoe Tamerlis is the WORST actress ever captured on film. If you thought Bo Derek or Pia Zadora were bad actresses, then after seeing Zoe in THIS, those ladies will look like Kathryn Hepburn and Meryl Streep by comparison. Usually poor acting isn’t too much of a distraction if the material is good, but every time Tamerlis speaks it is painful. Eric Bogasian and Brad Rijn fare much better. Larry Cohen has made so many great movies, mostly in the 1970’s, which seemed to be his decade. Interestingly he made another film the same year as "Special Effects," called "Perfect Strangers," which is actually MUCH better than this one. Strangely it’s not nearly as well-known, probably due to the fact that it isn’t flashy, and loaded with sex and violence. You do get plenty of that in this film. My advice is to skip this one and seek out "Perfect Strangers" instead. This movie gave me a headache, and I feel like i lost some brain cells in the process.