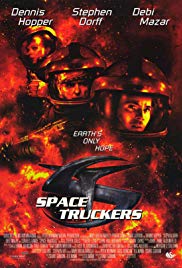 Storyline:
John Canyon is one of the last independent space transport entrepreneurs. Rough times force him to carry suspicious cargo to Earth without questions being asked. During the flight the cargo turns out to be multitude of unstoppable and deadly killer robots.
Written by
Dragan Antulov <[email protected]>
User Reviews: This is a good B-Grade film, and there are many reasons to watch it.

First, and the reason I watched it: Debi Mazar is gorgeous and gets plenty of quality screen time.

Second: the story line is interesting and imaginative.

Third: the special effects are more than decent when one considers the mid-range success this film’s creators would have been aiming for.

Fourth: the acting from the main pair (Charles Dance & Dennis Hopper) was spot on – considering this film was meant to be a space adventure/comedy.

Fifth: the design of ships and cargo carriers was very good.

Sixth: almost all of the dialogue was well written.

Seventh: the film should provide many laughs all the way through.

So why the terrible 4.9 rating? Is the film badly edited and hard to follow? Absolutely not. On the contrary this side of things was very well handled, and the film is very easy to follow with no errors of continuance.

Did the film suffer from bad casting? Definitely not, and both Charles and Dennis would be irreplaceable in my opinion. Remember Dennis Hopper’s terrific one liners in Water World? Well, he repeats that performance here in Space Truckers. Besides, we get to see Dennis play a heroic character for a change!

Does the film suffer from a lack of character development like some reviewers have said? Utter rubbish! I can’t say much here that would not give elements of the outcome of the story away, but I will say that if you miss character development in this movie then you didn’t watch it properly.

And one last thing; this movie is close to the mark as far as the reality of our world is concerned. Technology has created power for some people that we should all be very concerned about, and while Space Truckers is a comedy, I felt it hit very close to home on a few fronts.