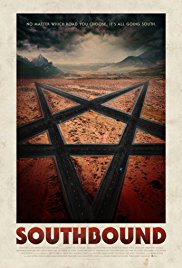 Storyline:
On a desolate stretch of desert highway, weary travelers – two men on the run from their past, a band on their way to the next gig, a man struggling to get home, a brother in search of his long-lost sister and a family on vacation – are forced to confront their worst fears and darkest secrets in a series of interwoven tales of terror and remorse on the open road.
User Reviews: Southbound does three things well.

First, it has some genuinely new stories to tell. That’s not typical for horror, where the same few stories are iterated upon repeatedly.

Second, it has fascinating characters that are brought to vivid life, with remarkably few brush strokes, but without ever resorting to stereotype. The quality of the writing, direction, and acting shine.

Finally, each of Southbound’s authors know to leave enough unsaid. Each chapter suggests a world of back story, but there’s no spoon anywhere in sight. Which is particularly important for horror, where what is made explicit can never approach the creepiness that is only imaginable.

What does it do wrong? Well, the effects can be shoddy, and there are a few scenes designed around an effect, rather than the effect crafted to the vision, leaving those scenes wooden. But that’s all, and for each awkward bit of gore, there are two or three masterfully directed scenes to compensate.

Southbound is a seriously enjoyable horror flick. See it when you can.