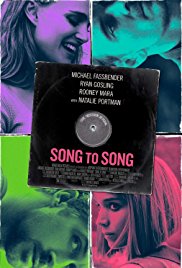 Storyline:
Two intersecting love triangles. Obsession and betrayal set against the music scene in Austin, Texas.
User Reviews: "Song to Song" (2017 release; 129 min.) brings the story of Faye. As the movie opens, we hear Faye announce in voice over "I went through a period where sex had to be violent", and with that we are off. Fay seems to have a relationship with both BV (a budding musician) and Cook (a record executive). We see them at various Austin landmarks and outdoor shows (ACL Music Festival, I assume). At this point we are about 10-15 min. into the movie, you’ll just have to see for yourself how it all plays out.

Couple of comments: this is the latest movie from writer-director Terrence Malick, Here he follows a path that s very similar of his previous film "Knight of Cups": essentially an abstract film about relationships, with not much dialogue but plenty of voice-over thoughts ("Any experience is better than no experience" and "I went along like someone in a dream", just to give you a glimpse). This movie was actually shot in 2011-12, and is only now seeing the light of day. Rumor has it that Malick had 8 hours of film which he had to cut down to this final version, just over 2 hrs., and when you are watching it, it does feel like we skip from scene to scene without any sense or purpose. As for the lead actors (Rooney Mara as Faye, Ryan Gosling as BV, Michael Fassbender as Cook; Natalie Portman appears about a half hour into the movie for some scenes; yet later Cate Blanchett, as a fling of BV, makes her entrance), it feels like most of what they are doing seems improvised. Not much of it makes sense or is coherent in any way, shape or form. Tons of cameos from the music world (RHCP, Iggy Pop, Patti Smith, Johnny Lydon, etc., mostly in a blink and you’ll miss it moment). As a long-time fan and admirer of Terrence Malick, it pains me to tell you that, on the heels of the so-so Knight of Cups, this is even worse. Given the all-star ensemble cast, what a colossal waste of talent all around!

"Song to Song" opened this weekend at my local art-house theater here in Cincinnati, and given who all was involved in this production, I couldn’t wait to see it. The Saturday matinée screening where I saw this at was attended okay but not great. "Song to Song" is not a movie that I can recommend to anyone, although there may be some curiosity about this film, given the all-star cast attached to it. Viewer beware! (*UPDATE* The movie sank like a stone at the box office, and disappeared after just one week from the theater here in Cincinnati.)