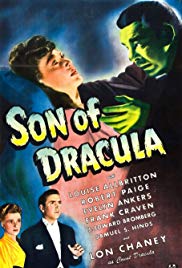 Storyline:
Count Alucard finds his way from Budapest to the swamps of the Deep South after meeting Katherine Caldwell, of the moneyed Caldwell clan that runs a plantation called Dark Oaks. She’s obsessed with occult matters. Who better to guide her through this supernatural world than Count Alucard, whose name no one bothers to spell backwards? No one, that is, except the wily Dr. Brewster, an old family friend. He’ll join Professor Lazlo, a specialist in the occult, in fighting this “Alucard” and the woman he’s influenced. Or has Katherine influenced him? Meanwhile, Katherine’s fiancé, Frank Stanley, will find his courage and his sanity sorely tested when he accidentally shoots Katherine to death, yet finds that she goes on living.
Written by
J. Spurlin
User Reviews: Count Alucard (Dracula spelled backwards) goes to Louisiana to make willing Louise Allbritton his bride. But she has other ideas up her sleeve.

Very atmospheric film starts slow but really picks up speed in the middle leading to a great, unexpected ending. Lon Chaney Jr. is (surprisingly) good as Alucard and the atmosphere is just beautiful…swamps drenched with fog and moss. Also Chaney plays Dracula NOT his son (despite the title). This was the first movie to use Alucard as an anagram for Dracula.

This was considered a lousy horror film for many years–most people complained that Chaney looked WAY too healthy to play an undead vampire and they found the plot slow. Now it’s getting the recognition it deserves. A well-done, neglected little gem. And, again, the ending is GREAT!