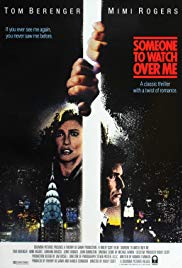 Storyline:
In Queens, Mike Keegan is celebrating with his wife Ellie, his son Tommy and friends his recent promotion to detective in a precinct in Manhattan. Meanwhile, in a fancy club, the socialite Claire Gregory witnesses the murder of the owner of the place by the powerful mobster Joey Venza. Mike is assigned to protect her in the night shift in her apartment in Manhattan. When Venza threatens Claire, the contact of Mike with Claire gets closer and conflicts him, dividing between the love for his family and the heat passion for Claire and the fascination for her world.
Written by
Claudio Carvalho, Rio de Janeiro, Brazil
User Reviews: I saw this movie when I was younger and for some reason it always stuck with me. I’ll always remember the music (the title song as well as the classical pieces used throughout), the vestibule of Mimi Roger’s apartment palace, the scene of Tom Berenger having breakfast with his family, Lorraine Bracco’s fiery performance as his wife, and the haunting opening aerial shots of NYC lit up at night. I watched it again for the first time in probably nine or ten years and it was like visiting with an old friend or curling up with a good book you had read before. You knew the story, but it was all fascinatingly interesting. The plot here is pretty basic: working class cop has to babysit upper class babe who witnesses heinous murder. It doesn’t take a rocket scientist to figure out how it all ends, but director Ridley Scott somehow manages to keep it compelling thanks to some great direction and wonderful performances from the cast. Somewhere I saw this billed as an erotic thriller, which is way off base. Scott keeps everything here extremely classy. It’s more of a romantic thriller and throwback to the noir films of the 1940’s. This may not be the best film you’ll ever see, but it’s one of the better thrillers of the 1980’s, and a worthy testament to Ridley Scott’s versatility as a director. It’s also nice to see Jerry Orbach in a supporting role that probably paved the way for his part in the never ending "Law and Order" TV series.

Storyline:Set in an apartment building whose occupants include Arthur Earthleigh, a meek and mild type married to the beautiful-but-domineering Mae; a Bohemian artist, David Galleo and his always-there model, Deborah ...

Storyline:The story of the rise and fall of the infamous Chicago gangster Al Capone and the control he exhibited over the city during the prohibition years. Unusually, briefly covering the years after Capone was impri...

Storyline:"Alien Agenda Planet Earth" reveals the shocking truth about UFOs and Extraterrestrials, a truth that has been suppressed and hidden for centuries. Fastwalker is the NORAD (North American Air Defense Command...

Storyline:A young Hollywood starlet must adjust to a new small town life when she is sent to live with her aunt after a stint in rehab.User Reviews: This is a really good made for TV movie which has recently made its ...

Storyline:Johnathan Cabot is a champion gymnast. In the tiny, yet savage, country of Parmistan, there is a perfect spot for a "star wars" site. For the US to get this site, they must compete in the brutal "Game". The ...

Storyline:Martha Horgan, a naive woman with an intellectual impairment who lives with her aunt Frances in a small town, is known for always telling the truth. She works at a dry cleaner, where her compulsive truth-tel...