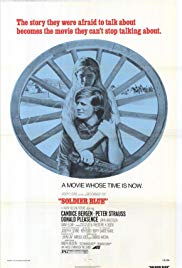 Storyline:
After a cavalry group is massacred by the Cheyenne, only two survivors remain: Honus, a naive private devoted to his duty, and Cresta, a young woman who had lived with the Cheyenne two years and whose sympathies lie more with them than with the US government. Together, they must try to reach the cavalry’s main base camp. As they travel onward, Honus is torn between his growing affection for Cresta, and his disgust for her anti-American beliefs. They reach the cavalry campsite on the eve of an attack on a Cheyenne village, where Honus will learn which side has really been telling him the truth.
Written by
Jean-Marc Rocher <[email protected]>
User Reviews: The movie talks a soldier (Peter Strauss) and a woman (Candice Bergen) abducted by Indians and now freed . Later on , they are attacked and will have to face off deal of dangers and taking on a cutthroat weapons smuggler (Donald Plesence) until a final massacre .

In this Vietnam-era Western there are noisy action , shootouts , fights , a love story , extraordinary landscapes and a big deal of gratuitous violence . The film is based on real deeds regarding ¨Sand Creek massacre¨ and there are some remembrance about Vietnam killings and hardship on racial themes by that time . The highlight of the movie , of course , is the Cheyenne massacre with lots of blood and guts , it results to be an authentic butchery and was censured , prohibited , cut , and severely trimmed in some countries . The motion picture is classified ¨R¨ for the cruel murders and isn’t apt for little boys, neither squeamish . The violence of its Indian slaughters , in which seemingly every part of the bodies were slice off and blood fountained all over the screen , brought worldwide queues and much criticism in the newspapers . The picture achieved too much success , in spite of violence and crude theme and excessive final brutality . The ending confrontation amongst the cavalry and the hapless Cheyennes is breathtaking and overwhelming.

Peter Strauss interpretation as a naive and innocent ¨Soldier Blue¨ is top notch and Candice Bergen as a reckless and impulsive girl is magnificent . Robert Hauser’s cinematography is excellent , the landscapes are glittering and spectacular . Roy Budd’s musical score is atmospheric and imaginative . The motion picture is well directed by Ralph Nelson though he develops an extreme ¨exploitation violence¨ in the final episode . Nelson traveled around the world to defend the film , his biggest box-office hit , insisting that the violence was utterly necessary and it was sincerely meant . Rating : Good , though very criticized for gory scenes . Well Catching , ‘a must see’ for action-starved Indian Western buffs who will enjoy the action and strong themes .