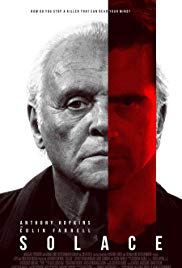 Storyline:
A psychic doctor, John Clancy (Sir Anthony Hopkins), works with an F.B.I. Special Agent (Jeffrey Dean Morgan) in search of serial killer Charles Ambrose (Colin Farrell). After having lived in isolation for two years, since the death of his daughter, Clancy is asked by his friend Joe, an F.B.I. Special Agent to help him solve several murders committed by a serial killer. The problem is that Ambrose is also psychic, and far ahead of Clancy.
User Reviews: If this reminds you of SILENCE OF THE LAMBS, it’s almost certainly meant to. Anthony Hopkins, in creepy (hammy!) near-Hannibal mode, plays a clairvoyant investigator helping the FBI track down a serial killer who – by credibility-stretching coincidence – also happens to be blessed with amazing psychic powers and has a seriously weird motive for his grisly crimes.

SOLACE was originally pitched as a sequel to SE7EN, we’re told, and had major production difficulties. There are echoes of almost all the Hannibal Lecter movies. Abbie Cornish’s FBI agent never escapes from the shadow of Jodie Foster’s Clarice Starling. Colin Farrell is, as ever, a charismatic presence, although he is playing a character the script does not make remotely believable. We see too many of Hopkins’s ‘visions’ of how things may (or may not) be about to turn out. Nowhere near as grim and atmospheric as SE7EN, SOLACE is more than a little daft – but despite muddled direction it’s still gripping and at least as watchable as a ‘vintage’ episode of CSI.