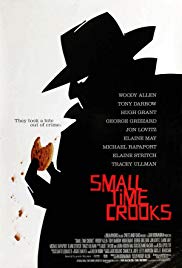 Storyline:
Dishwasher and small-fry criminal Ray hits on a plan with his partners in crime to re-open a local pizza place and dig through to the bank down the street. As his wife can’t cook pizza but does great cookies, that’s what they sell. While the no-hope tunnellers get lost underground, the cookie operation really takes off and the team find themselves rich business people. But the other local money isn’t quite ready to accept them.
Written by
Jeremy Perkins <[email protected]>
User Reviews: SMALL TIME CROOKS / (2000) ***

Woody Allen’s artistic sense of humor is the perfect style of wit for the timid new comedy "Small Time Crooks." Allen wrote and directed the film, which is pure Allen. This amusing filmmaker brings a focused sensation of clumsiness and silliness to the various ensemble of characters; this movie is classy, sharp, and funny.

Woody Allen stars as an ex-con named Ray Winkler, currently employed as a local dishwasher. He is the kind of person who comes up with maniac ideas he explains as beneficial, but they end up causing more grief than gratitude. His mangy wife Frenchy (Tracey Ullman) is sick of her loser lifestyle, so when Ray proposes to burglarize a nearby bank with his old buddies, including Denny (Michael Rapaport), Tommy (Tony Darrow), and Benny (Jon Lovitz), she reluctantly agrees.

Ray comes up with a scheme that consists of renting a storefront next to the bank in order to tunnel a passage way into their destination. To avoid suspicion, Frenchy and her cousin May (Elaine May) open a bakery offering cookies as the four criminals screw everything up in the basement. The cookie sales unexpectedly become a massive achievement, leading to the characters opening up a corporation that makes them rich.

The film’s setup introduces the main characters with intelligent humor and riffraff detail. We learn they are unintelligent, desperate, and deprived nobodies living in unmistakable poverty without purpose or hope of a decent future. Also decently developed is the story, with a clear, stable first act and early laughs to capture the audience’s attention from the start. This is the kind of movie that relies on situations to pull its characters through the story, and Allen gives the script fresh twists, active subplots, and creativity.

"Small Time Crooks" is a character movie; a study of well-acted personas given funny edge and dimension. The characters are dazzlingly portrayed by some of the most clever names in Hollywood. Woody Allen rehearses his basic charismatic personality that we all know and love, and brackets himself between witty dialogue and well-cast supporting actors. Tracey Ullman is perfect in a role seemingly prepared towards her performance and Hugh Grant’s false charming tenderness creates a despicable image in which the audience opposes but enjoys.

The movie’s story clearly exhibits the life of Ray and Frenchy, which is probably the smartest level in which it succeeds. We see gradual changes in the two as the story uses side characters as benchmarks that help to propel the plot along. There is minute tension involved with Ray and his spouse, however, although the Hugh Grant character provides a little romantic competition. If I had to change something in this movie, I would increase the level of the story’s stakes and change the horridly annoying soundtrack.

Too much of this movie relies on dialogue to pull itself through story slouches; at times the plot seems to drift and the character end up explaining developments and advancements. "Small Time Crooks" does not suffer to immensely in result of this material because Woody Allen often supports his dialogue with visual story and amusing conversations that look as if especially written for each character in each scene.

"Small Time Crooks" furnishes seeking audiences with effective comedy. So often we desire for comic adventures only to find contrived and recycled humor in stale stories. This film succeeds in perspiring light-hearted humor with a surprising human dimensional touch. "Small Time Crooks" will not disappoint fans of Woody Allen’s gawky sense of humor.

Storyline:In the not-too-distant future, as a final response to terrorism and crime, the U.S. government plans to broadcast a signal making it impossible for anyone to knowingly commit unlawful acts.User Reviews: