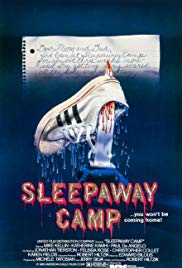 Storyline:
After a horrible boating accident kills her family, Angela, a shy and sullen young girl, moves in with her eccentric aunt Martha, alongside her protective cousin Ricky. One summer, Martha sends the kids to Camp Arawak. Soon after their arrival, a series of bizarre and increasingly violent accidents begins to claim the lives of various campers. Who is the twisted individual behind these murders? The disclosure of the murderer’s identity is one of the most shocking climaxes in the history of American cinema.
Written by
Drew
User Reviews: * 1/2 out of ****

The film is pretty much just another Friday the 13th ripoff. The acting, directing, and effects all could use a lot of improvement. It’s never boring, but it isn’t scary or interesting. The film never really moves. I wasn’t particularly interested in any of the characters problems and i didn’t really care about what was happening. It just didn’t thrill me. Of course i wasn’t expecting it to however. It seemed like a cheap kind of movie before i watched it. The ending, however, is a good jolt. It’s a pretty cool twist that definitely makers the film a lot more memorable. It’s kind of like a BEYOND THE VALLEY OF THE DOLLS sort of ending, only a little more unexpected and nowhere near as disturbing. It adds a nice dose of originality to an otherwise cheap outing.