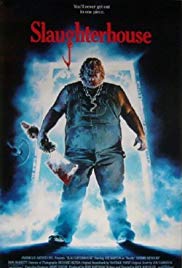 Storyline:
Owner of a closed down slaughterhouse sets his intellectually disabled psychopathic son on the people who want to take his land away and the unlucky teens that decided to party there.
Written by
Chris Hartley <[email protected]>
User Reviews: Typical ’80s slasher flick, with some authority figures threatening to shut down a slaughterhouse and so the owner gets his pig-like son to kill anyone who trespasses. The scenes of the inner workings of the place bring to mind how factory farming has replaced these local institutions. Unlike most slashers of the era, "Slaughterhouse" contains no sex or nudity. One thing that caught my eye was that the sheriff’s secretary was almost a dead ringer for Edith Bunker. I figure that Archie would say that people in slasher movies deserve what happens to them because they act like hippies.

Anyway, it’s pretty fun to watch, just as long as you don’t expect anything special.