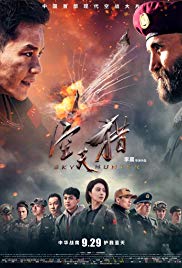 Storyline:
Wu Di (Chen Li),Zhao Yali (Bingbing Fan),Gao Yuan (Leon Lee) and Ba Tu (Guo Mingyu) passed the audit and joined a legendary China Air Force Base.Liu Haochen (Jiahang Li) is Wu’s friend,he is involved in a conspiracy with an international terrorist organization. After the Chinese government discovered that there is a big conspiracy behind all these terrorist attack.The Chinese air forces have to destroy the entire terrorist organization and the responsibility to defense the honor and the safety of The People’s Republic of China fell on Wu Di,Zhao Yali and other young pilot’s shoulders.
User Reviews: I watched this film and I was blown away. The production values, special effects, action sequences, and sound production were top notch. I saw no difference between this and America’s best blockbuster action films as far as quality is concerned.

The characters were humorous, likable, and believable. The plot was simple and action scenes kept the pace enjoyable throughout.

So, why the low rating? I looked at the 150+ odd votes and I noticed there’s a lot of racist trolls who manipulated the votes for this film.

I hope IMDb will clean up the trash because I’ve noticed the same pattern at other Chinese films like Wolf Warrior 2.

Watch the film. You won’t be disappointed, unless you’re a jealous racist hater.

Storyline:Centaur is a quiet, small and modest man, a loving father of a little boy that has never spoken a word and the husband of young, deaf-mute Maripa. Together they lead a simple life in a small village of Kyrgy...

Storyline:A female lawyer had lived a very apathetic career until she had a terrible car accident. She died in the accident but when she reached the afterlife she learned that she came earlier than she was supposed to...