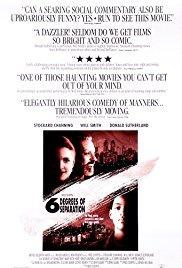 Storyline:
New Yorkers Ouisa and Flan Kittredge are upper-class private art dealers, pretentious but compassionate. Their prized possession is a double-sided Kandinsky: one side represents control; the other, chaos. They relay a story to their friends and acquaintances that becomes legendary over time: their encounter with a young black stranger who came stumbling upon their front door one evening as they were courting Geoffrey Miller, an important investor who could make them wealthy beyond their dreams. The young man, Paul Poitier, had just arrived in the city when he was mugged outside their building; he sported a minor knife wound to the abdomen. He was a friend of the Kittredges’ children, who are attending Harvard; more importantly, he’s the son of actor/director Sidney Poitier. Tomorrow, Paul is meeting up with his father who is in town directing a movie of “Cats”. Beyond the attraction of talking Paul into getting them roles in the movie, Ouisa, Flan, and Geoffrey all end up being …
Written by
Huggo
User Reviews: This is the film that made even the most harshest critics admit that Will Smith had real potential as far as being a serious actor is concerned. This is the story of a young gay hustler named Paul (Smith) who knocks on the door of Ouisa and Flan Kittredge (Stockard Channing and Donald Sutherland) and tells them a story of being mugged and also being the son of Sidney Poitier. He says he knows their children from college and remembered they lived there so thats why he came. After a lot of talking and impressing them he cooks them a nice dinner and they invite him to spend the night. They also loan him money but in the morning they find him with another man and they kick everyone out. The Kittredge’s talk to their friends and find out that they all encountered Paul as well but were afraid to say something because they were embarrassed. The films title refers to the fact that we all know everyone by six people or degrees. The main focus of the film deals with how this young man made these characters take a good hard look at themselves and the relationship they have with each other and their children. The writing is very sharp and for most of us what is being said onscreen can easily go over our heads. Its a very intelligent script that forces the characters to see things that they seem to take for granted. Directed by Fred Schepisi who has shown a real knack for filming plays before and he also has shown to be very good at making films that are more character oriented. I remember one of his first films from the 70’s called "The Devils Playground" and was impressed at that time by his direction. What really stood out for me though were the performances. Will Smith seems to tackle this complex script with an all to easy manner. As I watched his performance it was clear that he really understood the script and his character. You don’t see that everyday from such a young actor, especially one that has limited training. But for me the best performance comes from Stockard Channing who was in the play as well. She’s always been a very strong actress and a very underrated one at that. While watching her character in this film Channing does a wonderful job of allowing the viewer to watch her characters attitude change from the first scene to the very last. It really is Channings film and she received a well deserved Oscar nomination for it. Its one of the best in her career and its the driving force for the film. Casual film watchers may be put off by the sharp dialogue at first but I hope they stay with it, its a very good film about self realization and all the actors here are terrific.