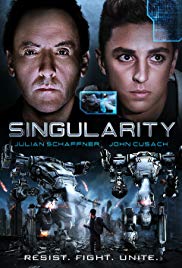 Storyline:
In 2020, Elias van Dorne (John Cusack), CEO of VA Industries, the world’s largest robotics company, introduces his most powerful invention–Kronos, a super computer designed to end all wars. When Kronos goes online, it quickly determines that mankind, itself, is the biggest threat to world peace and launches a worldwide robot attack to rid the world of the “infection” of man. Ninety-seven years later, a small band of humans remain alive but on the run from the robot army. A teenage boy, Andrew (Julian Schaffner) and a teenage girl, Calia (Jeannine Wacker), form an unlikely alliance to reach a new world, where it is rumored mankind exists without fear of robot persecution. But does this world actually exist? And will they live long enough to find out?
User Reviews: I can hardly believe John Cusack put his name to this.

Special FX were presumably done on a phone using an app. The story, dialog and acting are cringeworthy.

ps. ignore the fake reviews on here, watch the trailer and you will get an instant feel for just how bad it is.

Storyline:The epic story of the global health movement is seen through the intimate narrative of Dr. Paul Farmer, Dr. Jim Yong Kim, and other courageous doctors and patients who led the fight, against seemingly insurm...

Storyline:Classes. Football. Finals. A bad break up. An over-bearing mom. Like many college kids, what helps Drew Dawson stay balanced is Adderall, a prescription he's been on since age 10 for ADD. His ex-girlfriend A...

Storyline:Waldemar Januszczak explores the impact of Mary Magdalene's myth on art and artists. In art all Christian saints are inventions but Mary Magdalene has been the subject of more invention and re-invention than...