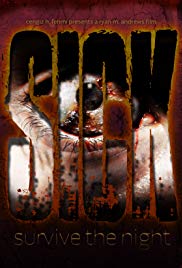 Storyline:
Two years after the infection began, billions have died, Governments have collapsed and the human race is on the brink of extinction. Dr. Leigh Rozetta is a young, maverick scientist, who’s been living in a secret underground Government facility since the outbreak began. After constant failed attempts to find a cure, Leigh sneaks away to return to her parent’s house. On her way, she crosses paths with Seph and Mckay, two militant survivalists who only just barely escaped an attack from a group of infected. With nightfall close at hand, the three of them know they need to seek shelter, as the SICK are more active in the dark. Boarding themselves up in Leigh’s parent’s house, the plan is simple, survive the night. But with the SICK surrounding the house and their own tensions through the roof. They’ll be lucky if anyone makes it out alive.
Written by
Matthew Storey
User Reviews: The story is a somber, monotone one that relies on a lot of dialog. Most of the story is about the human experience and toll the zombie apocalypse has on one psychologically as we battle for a "cure". It is reminiscent of Romero’s "Day Of The Dead" in pace and stripped down style. The acting is mediocre, with a lot of the characters feeling contrived. It is a clunky drama that does more peacocking of personalities than the material, or cast can actually account for. There are moments when the story almost becomes thrilling, and a few of the cast really get into their character. It is just not enough to save "Sick: Survive The Night" from being a bit dull.

The special effects, for the most part, keep within practical-low budget grade effects that work. I preferred the stripped down zombies that go back to the beginning of this genre. The creature effects are cool enough, however the zombies don’t dominate the film with enough force or energy to really kick "Sick: Survive The Night" into thrilling gear. The soundtrack and sound effects are decent enough to give the film atmosphere, some moments do feel creepy and chilling, it just never seems consistent through the whole film.

Overall, I found myself wondering why? What was the story that this film was wanting to tell? Most of the components are redundant aspects found in zombie horror. I did appreciate the added mix of these scavenger crews roaming around raping and pillaging. However the story doesn’t give enough time for that element to really take off. Most interesting things take place in flashbacks while the main meat of the tale is left to melodrama and mild zombie attacks. "Sick: Survive The Night" isn’t a film that you will kick yourself if you miss it. Mostly it is just a boring movie where people talk too much.

Storyline:After a premature birth. Carla, a new mother, will face his ghosts of the past and move into the old family farm, set in an austere environment.User Reviews:

Storyline:The story of three women whose worlds collide - a social commentary about the 'sound bite' society we are becoming, where perception becomes reality and judgments based on limited facts quickly spread, witho...

Storyline:Determined to become the leader of the Dominion of Canada, a young W.L. Mackenzie King rises to power.User Reviews:

Storyline:A love story about a woman who User Reviews:

Storyline:Lauren wants to rebuild her community, including her family home, in the aftermath of a devastatingly disastrous storm.User Reviews:

Storyline:A horror film about a screenwriter who loses the ability to distinguish between his fantasy world and the real world, with disastrous consequences. As he ruminates on his place in any world and loses his gri...

Storyline:To celebrate their graduation, the teenagers from Valley Hills High School have organized an ’80s-themed party in an old water park. Things grow gruesome when it turns out that a mysterious maniac has insert...