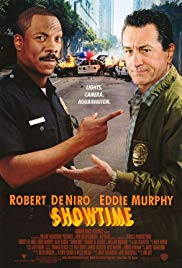 Storyline:
LAPD Detective Sergeant Mitch Preston cares only about doing his job and nailing crooks. LAPD Patrol Officer Trey Sellars joined the force as a day job until his acting career took off. During an undercover drug buy Mitch was working that Trey botched by calling in for backup and drawing media attention, Mitch’s partner is shot with a very exotic 12-gauge automatic weapon; Mitch then shoots the video camera out of the hands of a reporter filming the action when the cameraman refused to shut it down. Faced with a $10 million lawsuit, the department agrees to let producer Chase Renzi film Mitch’s investigation for a new reality TV show, and constantly tries to make everything more “viewer friendly” by changing everything about Mitch’s life to fit the stereotypical view of police officers–and partners him with Trey.
Written by
Jeff Cross <[email protected]>
User Reviews: This was a pretty good modern-day comedy with straight man Robert De Niro doing a good job with comedy and Eddie Murphy just playing his normal whacked-out character. You get a good combination of humor and action in here. It had the normal cliché the ending, the kind you can see coming a mile away, but it’s okay; it didn’t hurt the film.

William Shatner was very entertaining in a supporting role and I think that was De Niro’s real-life daughter playing Rene Russo’s TV sidekick in the movie.

A decent cop-buddy film that isn’t memorable an entertaining way to kill an hour-and-a-half.