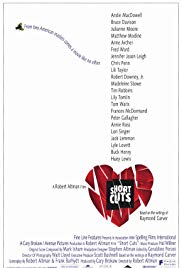 Storyline:
Nine short stories relocating the settings from Carver’s Northwest to Los Angeles during a spraying of malathion brought on by a Medfly epidemic – intercut tales of disconnection and emotional emptiness. The stories concern variations upon the theme of Los Angeles angst –a happily married couple, Ann and Howard have to deal with the deep emotions felt when their child, Casey is struck by a car before his birthday and lapses into a coma, while the baker Andy of their child’s neglected birthday cake sinks into a rage and torments them in their grief. Three men Stuart, Gordon and Vern leave on a much anticipated fishing trip, only to discover the drowned body of a nude woman floating in the river and decide to finish their fishing trip and ignore the corpse. A Los Angeles cop, Gene uses his badge as an excuse to cheat on his wife, Sherri. A pool cleaner Jerry resents his wife, Lois for her part-time job as a phone sex performer. A waitress, Doreen is devoted to her limousine driver …
Written by
lament
User Reviews: After watching this film one thing I was left with was a feeling of tremendous euphoria, a glowing feeling which lasted well into the next morning. I could not help but think that this collage of events in the lives of 22 people in sunny LA was realism. Not the harsh gritty realism of ‘Taxi Driver’, but a different realism. This movie is who we are, as people. This movie chronicles the emotions we may have when confronted with a persistent crank caller, or the lingering suspicion of a partner’s affair. And the acerbic intelligence of the script is tempered with director Altman’s stunning technical virtuosity.

The style is very pastiche, and one scene cuts to another, as the title suggests, with reckless abandon. This lends a very fresh and watchable quality to what is by any standards a long film. While most of the characters never meet, the movie is given shape by the connections between scenes. The connections are of two kinds: thematic connections for which the credit goes to the script, and also visual connections whereby the direction and editing employed by Altman allow him to create recurring imagery with which he weaves the sprawling, kicking constituent bits and pieces of this movie together. This style works very well indeed and at the end of the film, miraculously you are left not with the impression of having just watched a series of ‘short cuts’, but something entirely more holistic in nature.

There was not a false note in the acting and the star-studded cast did great justice to a remarkable script. The casting is flawless, from Tim Robbins’ adulterous cop to Julianne Moore’s adulterous painter. The camera-work is refreshing in its fluidity and control, transmitting an intense watchability. However many feelings there are in the human emotional vocabulary (and I am sure there are a fair few), it seems that ‘Short Cuts’ is somehow able, in the course of three hours, to display (in the actors) and evoke (in the audience), each and every one of them. For those who are of the belief that modern Hollywood is unable to produce films of artistic merit, watch this movie now or hold your peace forever.

Storyline:In the series finale, the town of Walnut Grove is revealed to have been built on land owned by a railroad tycoon. The citizens deal with the loss of their town and lifestyles, and some must decide how best t...

Storyline:Charley Davis wins an amateur boxing match and is taken on by promoter Quinn. Charley's mother doesn't want him to fight, but when Charley's father is accidentally killed, Charley sets up a fight for money. ...

Storyline:Lawyer Joe Morse wants to consolidate all the small-time numbers racket operators into one big powerful operation. But his elder brother Leo is one of these small-time operators who wants to stay that way, p...