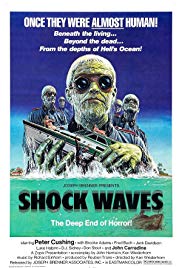 Storyline:
This horror movie concerns a shipwrecked yachting party. Rose and her fellow yacht-mates, including the captain run aground on an island when they hit an odd-looking freighter. Once beached, they meet up with an aging SS Commander who had been in charge of a crew of zombies.
Written by
Ørnås
User Reviews: I rented this film a few years ago strictly because I was a fan of Peter Cushing. I thought "Hm – Underwater Nazi Zombies? This should be fun." I had a mental image of Cushing running around in some green velvet Victorian jacket and a full head of hair opening cages and sending zombies off to do his bidding. Boy was I wrong. I got a grainy, dark, brooding little 70s movie that kept me looking over my shoulder. Pete looks terrible in a torn uniform, scarred face and bald pate. His performance is brief but striking. The rest of the cast (John Carradine – excepted) is fairly unfamiliar. This makes it all the more terrifying. They could be your neighbours being chased around and murdered by these horrifying monsters. And the zombies are some of the scarriest on film. They don’t scream, or eat anybody. They just bob out of the water staring through black goggles and cut a path of destruction across the island. Wonderful. Contrasting to what I expected, this amazed me. It has since become one of my all time favourite horror films. It sure scared me more than Texas Chainsaw Massacre. Kind of a letdown there. But then I always could trust in Cushing.

Storyline:Over-the-hill gumshoe in Los Angeles seeks to avenge the killing of an old pal, another detective who had gotten himself involved in a case concerning a murdered broad, stolen stamps, a nickel-plated handgun...

Storyline:Four best friends from boarding school decide to attend a massive blow-out High School graduation party on Block Island. After missing the last ferry they decide to hire a fishing boat to take them on what s...