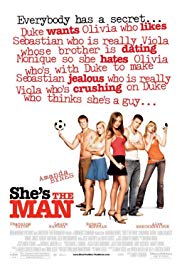 Storyline:
Here’s the thing! Viola’s soccer team at Cornwall gets cut. She wants to join the boys’ team, but they do not allow girls. So she thinks, “If you can’t beat them, join them”. So she does! She disguises herself as her twin brother, Sebastian and goes out for the rival school, Illyria Boys’ Soccer Team and makes it. Unfortunately, she didn’t plan falling in love with her roommate Duke. But Duke has his eyes on Olivia. What makes matters worse is that Olivia starts to fall for Sebastian because he/she has a sensitive side. If things couldn’t get more problematic, the real Sebastian (who was in London working on his music) comes home early. He arrives on campus and has no clue that he was replaced by his twin sister.
Written by
Barbara-Ann
User Reviews: Viola Johnson (Amanda Bynes) enters a prestigious boarding school disguised as her brother, so that he can run off to London to become a musician. Unfortunately, she immediately falls for her male roommate, who already has a crush on a girl who now has a crush on the male version of Viola.

Combining the story of "Just One of the Guys" and Shakespeare’s The Twelfth Night may sound like a recipe for disaster but She’s the Man is a funny, charming and cheesy movie. The original trailer looked really lame yet the film turned out to be quite enjoyable. The story is clearly nothing new but it still works fine. The fact that the screenplay is written by Karen McCullah Lutz explains everything. She’s good for harmless, fun films like She’s the Man, Legally Blonde and Ella Enchanted. Andy Fickman does a decent job as the director. He never lets the film become too serious or else it would ruin the movie’s appeal. He does overload on a few lame jokes though. That was the major problem I had with this film. Some of the jokes just fell flat while others were just incredibly cheesy, even for this film.

The acting was good for this type of movie and most of the actors were enjoyable to watch on screen. Amanda Bynes is full of charm as Viola. It was very hard to actually hate her and she’s a much better actress than Hilary Duff. Channing Tatum was not as strong as Amanda. His performance was okay, sometimes his reactions were a little fake. Laura Ramsey plays Olivia and she gives a decent performance. Alex Breckenridge gives a pretty good performance as Monique. Her character was pretty interesting and she had decent chemistry with Amanda. The rest of the supporting actors are good except for David Cross. He plays the school principal and his performance was not funny at all.

If you do give She’s the Man a shot then keep in mind that the entire film is highly unrealistic. I was reading some of the posts here and a few people are bashing the film for that. While the movie is pretty entertaining, it’s also easily forgettable. It was a fun way to spend 100 minutes but it won’t stay in your memory for long. It’s also not just a chick flick and a guy could also like the movie. In the end, She’s the Man is worth checking out whether that be in the theaters or on video. Rating 7/10