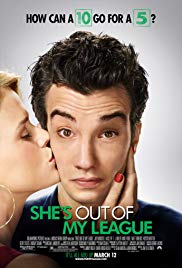 Storyline:
Kirk is an average Joe who works as a TSA agent at the Pittsburgh airport with his friends. The status quo of his fairly monotonous life ends when he meets Molly, a smart, kind and gorgeous blonde. Because she’s way out of his league (she’s a hard 10 and he is but a 5), Kirk knows there’s no way on earth she’s ever going to fall for him. Or is there…?
Written by
Marco van Hoof <[email protected]>
User Reviews: I went into the early screening of this movie tonight with low expectations, having not heard much about the movie, nor seen any trailers. I was floored! The cast is great in their parts and the script is hilarious. If you like any of the Judd Apatow films (I don’t think he was a part of this movie, but it is the same kind of humor) then you will like this one. Fans of Knocked Up will recognize Jay BarucheI who plays the awkward lead with weak self esteem, and he is as cute as ever. I also had a chance to meet the lovely Alice Eve, who attended the screening and she was very nice and very beautiful. I hope to see more of her in the future. While this wasn’t Shakespeare, it was a great laugh and very fun to see with friends.