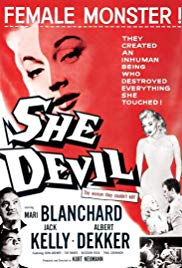 Storyline:
Doctor Dan Scott (Jack Kelly) invents a serum that cures illness and Kyra Zlus (Mari Blanchard), dying of tuberculosis, agrees to be a guinea pig. She becomes well and strong, but develops strange characteristics and a scheming personality. She kills Evelyn Kendall (Fay Baker) in order to marry her wealthy husband, Barton Kendall (John Archer) and later kills him to inherit his wealth. Dr. Scott and his associate, Dr. Richard Bach (Albert Dekker) decide that something drastic must be done and they trick her into having an operation.
Written by
Les Adams <[email protected]>
User Reviews: Dr. Scott has created a miracle serum. When he’s given it to animals with horrible injuries or on the verge of death, they quickly recover and are healthy. So, they want to try it out on a human…but ethically the only way they could do this is to give it to a terminal patient with no hope for recovery. Kyra (Mari Blanchard) is dying of advanced tuberculosis and she very willingly agrees to be the guinea pig. Amazingly, she soon completely recovers. However, there are unforeseen complications–she is now virtually indestructible AND she’s evil!

Soon, Kyra is off doing rotten things…and with seeming impunity. In a really, really neat scene for a 1950s film, she bashes some poor guy over the head while stealing something. When the police are searching for her, she hides out in a dressing room and wills her hair color to change…and it does on camera! Then, she just walks off…as they’re looking for a brunette and she’s now a platinum blonde! And, she seems to exude sex appeal that turn men into puppets in her hands! What’s next for this budding sociopath with X-Men powers?!

Overall, this is a highly entertaining film that doesn’t always make sense. Why didn’t the doctors go to the police? This never made complete sense.

Storyline:The Candyman returns to try to convince his female descendent, an artist, to join him as a legendary figure. To this end, he frames her for a series of hideous murders of her friends and associates so that s...

Storyline:The story revolves around a man trying to uncover the mysterious death of his girlfriend and save an innocent man from the death chamber in the process, by using his unique power to time travel. However in a...