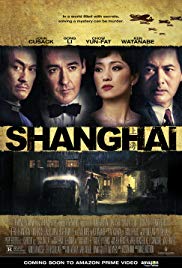 Storyline:
An American man returns to a corrupt, Japanese-occupied Shanghai four months before Pearl Harbor and discovers his friend has been killed. While he unravels the mysteries of the death, he falls in love and discovers a much larger secret.
Written by
Marisa_Gabriella
User Reviews: This movie captures that period of 30’s Shanghai quite well. Well I wouldn’t be the best person to judge considering I know little about that time, but from what I had seen in this film, it was very intriguing.

This espionage/war film gets your attention. The plot is not too complicated, has a nice pace, good performances and an international cast. John Cusack is decent in this role, Gong Li is gorgeous as ever and her English seems to have improved. She captures the screen with her grace and beauty, but also a believable performance. Chow Yun Fat is equally as good. Ken Watanabe – a good performance though he really needs to work more on making his accent understandable as I still have a little trouble with him, but nevertheless makes a good icy character.

The last act creates the suspense very well, though I’ll have to admit, though I found the ending dramatic and decent, it might have been more interesting if they actually filmed what happened instead of doing the voice-over, but hey I guess budget constraints and time can get in the way, so I’m alright with it I suppose.

This is a visual feast. It is good to see many actors of different nationalities blend in for what is a cross country story. Japan/China/Germany. Franka Potente has a role here too, which I enjoyed as well.

The only problem with the film, though it wasn’t it’s fault, was that the version I watched did not have English subtitles when they were talking in Chinese. At first, I thought that this was part of the movie, as you weren’t meant to understand it, but there are important scenes near the end where I had no clue what they were saying. It didn’t mean I didn’t get the rest of the plot or what was happening, but that could have given me a bit more to work with and more juice as well. Oh well, it’s not their fault.

This is an enjoyable movie, and it captures that sense of mystery, mistrust, betrayal and fear that you experience during an espionage/war film. Though this isn’t essentially a war film in that it’s main focus is about blowing up people etc, it is about the struggle of invasion and the effects of it. Recommended.

I hope it gets a wider release in the US and here in Australia because it is a good film.

Storyline:Young and attractive, northern Japanese girl from Niigata Prefecture makes the move south to the bright lights of the Japanese capital of Tokyo upon graduating from high school. Hiromi aspires to become an a...

Storyline:Several years earlier gangster Frank Buchanan was deported to his native Italy through the efforts of law enforcement authorities and rival gangsters who inform on him. While in Europe he meets scientist Wil...

Storyline:Celestine, the chambermaid, has new job on the country. The Monteils, who she works for are a group of strange people. The wife is frigid, her husband is always hunting (both animals and women) and her fathe...

Storyline:Miranda is a crew member of a nightly radio programmme. She and her husband Felix, a cop, are parents of a girl. Miranda's daily dog walking strolls are excuses to pursue sexual encounters with men, who she ...