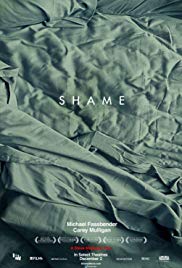 Storyline:
Brandon is a 30-something man living in New York who is unable to manage his sex life. After his wayward younger sister moves into his apartment, Brandon’s world spirals out of control. Shame examines the nature of need, how we live our lives and the experiences that shape us.
Written by
Momentum Pictures
User Reviews: What Director Steve McQueen and co-writer Abi Morgan achieve in the raw and powerful Shame starring breakout star of 2011 Michael Fassbender and Academy Award nominated actress Carey Mulligan is some of the most daring and provocative work seen this year. Telling the story of Brandon (Fassbender), a mid-30s successful businessman who balances his work life and his unflinching addiction to sex on a daily basis. When his free spirited and often times irresponsible sister Sissy (Mulligan) drops by unexpectedly, Brandon is faced with having his dark secret unravel in his day-to-day operations.

Headlined by tour-de-force performances by Fassbender and Mulligan, Shame wraps you from moment one, never easing its unyielding grip on us and showing the darkest parts of nature in a fresh and venturesome manner. McQueen and Morgan shape their narrative in a classic storytelling procedure that entices the viewer without ever feeling forced. They build two authentic characters that surprisingly you can relate to and find solace in. This archetype could be considered one of the best written works of 2011.

McQueen’s direction is steady, precise, and full of originality. As stylistic as his direction is, his third act does lose its gravity leaving some thoughts to maneuver in and out. Two polarizing technical aspects of the film are Joe Walker’s very impressive editing work, showcasing some of the most vulgar yet necessary scenes of the year. Also, though sadly brief, Harry Escott’s massively transcendent score builds up to one of my favorite opening film sequences seen this millennium. So about the nudity you ask and that NC-17 rating? It’s all necessary. It never feels forced or for the sake of showing a genital. It’s all important and unique to the story. But rest assured, it does deliver some of the most graphic images seen (that’s not pornography) on film.

Fassbender and Mulligan set the screen on fire. Fassbender dedicates himself to Brandon, showing all the beauty and ugly, and bestowing upon us, one of the finest Oscar-caliber performances of the year. He doesn’t allow judgment, he becomes, he doesn’t allow resurgence, he inhabits. It’s one of the year’s best turns by a leading man. Mulligan achieves her most raw and passionate performance to date. As Sissy, she dives in, lives, and never comes up for air. What’s most impressive as oppose to her other work in Nicolas Winding Refn’s Drive earlier this year and her nominated work in Lone Scherfig’s An Education, is Mulligan endures and persists Sissy with tenacity and bravery. I hope Oscar can recognize greatness as it walks across their screens this year because Mulligan is the truth.

Shame delivers in not only the essence of indomitably but in unique semblance of a raw and illuminating piece of cinema. It likely will be one of the dark gems audiences and critics wish they embraced from 2011.

Storyline:After 5 years of marriage, Ben is still madly in love. Until the day he discovers in public that his wife is cheating on him: humiliated and dumped in the process.User Reviews: In 2020/21, French movies are ...