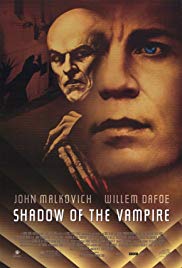 Storyline:
Shadow of the Vampire is a film about the making of a German all time classic silent horror-movie from 1922 called Nosferatu-Eine Symphonie des Grauens (Nosferatu-a Symphony of Horror). The production of Nosferatu had to deal with a lot of strange things (some crew members disappeared, some died). This movie focuses on the difficult relationship between Murnau, the director, and Schreck, the lead actor.
Written by
Anonymous
User Reviews: This movie is a true relief for everyone who thought the genre of horror and mystery was dead and buried. It feels good to see that it’s still possible to create movies like this. Even though the plot is rather simple, the movie seems to be very original and innovating. The basic idea behind this movie is so simple that it is – in fact – brilliant and it makes me wonder why nobody has thought about this earlier. The movie is completely based on the very early horror milestone "Nosferatu, ein symphony des grauens". Legendary actor Max Schrek is portrayed here like a REAL vampire who regularly takes a bite out of his crew. Director F.W. Murnau knows about this but finishing his movie is a higher priority to him than to sacrifice a few people.

This theme makes it of course a must for the ancient horror fans. Lots of footage and trivia of the 1922 masterpiece are shown and that’s a real extra value for true cinema buffs ! But of course, this movie reaches far above average thanks to the brilliant performances. A totally disguised Willem Dafoe is absolutely amazing in his role of Max Shreck. It’s like looking at the real Schrek…the resemblance is terrific. His appearance (especially the long nails) give you the creeps whenever he’s on screen and his voice haunts your head every time he says something. Dafoe never gives away a bad performance but this one is extraordinary. And of course,the same can be said about John Malkovich…his portrayal of director F.W. Murnau is extremely realistic and believable. He plays Murnau as the man who slowly goes insane because he tries to be too perfect. An amazing performance !!

There aren’t many shock effects to detect in this movie but that’s rather normal, right ? After all, it’s more like a costume-drama than it is horror. The lack of exiting scenes is made up by the constant presence of tension and an extremely appropriate atmosphere. Also, a perfect image of Eastern Europe in the 1920’s is presented to the audience. All these aspects make a much better movie then just some ordinary slashing and slicing throats. A must see !!

Storyline:Three family members break into a remote country house to recover secret documents, but discover a cult of wealthy adults dressed as babies inside with sexy "nurses" as their caretakers.User Reviews: A fine ...

Storyline:In 1950s Africa, a tribal magician calls up a demon to kill Europeans.User Reviews: The Curse movies are exactly alike the Beyond the Door series in that none of the films bear any relationship whatsoever fr...