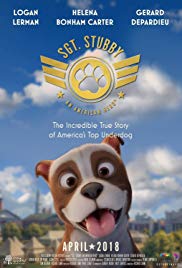 Storyline:
With the war to end all wars looming, a young army “doughboy” Robert Conroy has his life forever changed when a little dog with a stubby tail wanders into camp as the men of the 102nd Infantry Regiment train on the grounds of Yale University. Conroy gives his new friend a name, a family, and a chance to embark on the adventure that would define a century. Despite lacking formal military working dog training, Stubby the dog and his human companions find themselves in the trenches of France and on the path to history. French Infantryman Gaston Baptiste befriends the duo and accompanies them along their epic journey through harsh conditions and incredible acts of courage. For his valorous actions, Stubby is recognized as the first canine ever promoted to the rank of Sergeant in U.S. Army history.
User Reviews: I usually watch violent crime dramas and so this is a radical departure from my usual taste in films. I loved Sgt. Stubby,. The animation is incredible and the story a great tale (or tail) of doggy heroism during WWI. Stubby was a mutt from New Haven, Connecticut who was adopted by a military unit in 1918. America sent troops to France to fight the Germans and the doggy was hidden on a ship. Stubby had an uncanny ability to sense danger and warn his human masters. He also found wounded soldiers and alerted his caretakers as to their location. I have added this movie to my ten best list of 2018.

Storyline:Xia Zhi (by Xiao Shenyang) bluffs a lot. He is blowing hot air in his lover Xiao Xue's (by Ivy Chen) restaurant as usual. Meanwhile, Xia Zhi notices a group passes the restaurant. He tells that it must be a ...

Storyline:Metus is previously known as Deepest Fear: "When a detective investigates the unusual suicide of 2 girls he ends up caught in the middle of a demonic game"User Reviews:

Storyline:Three recruits land in Navy boot camp in San Diego: Potter from Kansas, wealthy Benson (who has experience with yachts), and dirt-poor Dan. Kansas gets in trouble for not having his cover. Dan has color-visi...

Storyline:Amina, a young girl, lives with her grandmother, mother, Rukaya, and mother's brother lazy Akatok in a small town in Gana. Her father disappeared before she was born leaving her mother pregnant. Her grandmot...

The Accountant of Auschwitz (2018)

Storyline:Oskar Gröning was one of the last surviving members of the SS to be implicated in Nazi crimes against humanity. Becoming known as the "Accountant of Auschwitz," he was charged with the murder of 300,000 Jews...