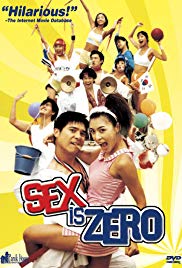 Storyline:
At Sunjong University, a few students are serious, including Eun-hyo, who works hard at aerobics in hopes of doing well in a national competition. Most students goof off: drinking, partying, and focusing on sex. Eun-shik, a law student who’s been in the military, is older but socially inept. He likes Eun-hyo; even though his earnest and simple side appeals to her, his juvenile excesses make him irrelevant when Sung-ok, a good-looking rich kid, charms Eun-hyo. They begin an affair, leaving Eun-shik on the sidelines. The national competition approaches and complications arise.
Written by
<[email protected]>
User Reviews: As a fan of Asian comedies and in this particular case a Korean comedy I was more than ready to witness the mixture of absurd comedy, over the top action and drama. I even started to like the unusual trio that so commonly propels from Asia these days. But what I don’t like is the evident line in films where one genre takes an indefinite bow to let the other genres get to its audience by the way of deep sorrow. The flow of the film suffered a great deal towards the middle where we were subjected to believing that Eunshik was a romantic at heart, even though he seems like an out of town village idiot stuck in college, too tough to be hurt and too stupid to know how to treat one of the most popular girls in school. Somewhat reminiscent of the main male character from One Nite In Mongkok, minus the porn addiction and absence of judgement when it comes to eating nasty food.

Even by disregarding the obvious jests the comedic moments are nothing to write home about (sorry Mom). I laughed a few times but the lack of established wacky characters didn’t keep me interested mainly because when the dramatic part kicked in, the sexed up eye candy was replaced by unbelievable romance and drama.

I could go on about the many things that don’t fit together in this film, but not without saying that this movie holds some very nice looking Korean girls who bare more than most would expect from a Korean comedy. If you are tired of seeing the usual mold of American chicks being sleazy in teenage comedies like Road Trip, Tomcats and Scary Movie, and have an interest in seeing raunchy Korean girls, then this shows fistful of that.

I give this movie a 5 out of 10 for being an alternative copycat of American gross-out comedy genre with some unnecessary drama mixed in. It’s something worth viewing once, but don’t go out of your way to see it.

Storyline:A coven of devil-worshiping monks living in New York City search for victims for their sacrificial ceremonies.User Reviews: "Prime Evil" came in a boxed set of bad "b" movies. The hope wa...