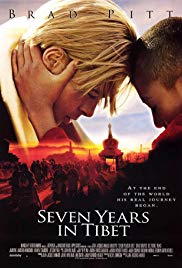 Storyline:
After the death of 11 climbers, Austrian Heinrich Harrer (Brad Pitt) decides to add glory to his country and to the Austrian pride by climbing Nanga Parbat in British India, and leaves his expectant wife behind. An egoist and a loner, he does not get along with others on his team – but must bend to their wishes after bad weather threatens them. Then WWII breaks out, they are arrested and lodged in Dehra Dun’s P.O.W. Camp. He attempts to break out several times in vain, but finally does succeed along with Peter Aufschnaiter (David Thewlis), and they end up in the holy city of Lhasa – a place banned to foreigners. They are provided food and shelter, and Peter ends up marrying a tailor, Pema Lhaki, while Heinrich befriends the Dalai Lama. They meet regularly; while he satiates the child’s curiosity about the world, including Jack the Ripper and ‘yellow hair’; he is exposed to the teachings of Lord Buddha, He even constructs a movie theater, while getting news of the end of the war, his …
Written by
rAjOo ([email protected])
User Reviews: This movie has some of the best cinematography I have ever seen. The movie does a great job of showing the Potala Palace and Jokhang Temple in Lhasa as well as the rural villages of Tibet. Not to mention the breath taking views of the Himalayas.

Yes, Brad Pitt’s accent wasn’t exactly his best but it’s forgivable when watching the movie. His acting was superb, portraying Heinrich’s transition, which is what the movie is all about.

The movie did lack qualities of the book, the ending was totally wrong and somewhat disappointing. And the whole Nazi part in Austria was completely unnecessary.

Besides a few minor details, the movie is well worth the 2 1/2 hours especially if you are interested in the Chinese seizure of Tibet and the Tibetan culture and people.