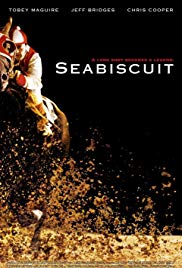 Storyline:
It’s the Depression, and everyone needs to hold onto a dream to get them through the bad times. Car maker Charles Howard is no different, he who is trying to rebuild his life after the tragic death of his only child and the resulting end of his first marriage. With second wife Marcela at his side, Charles wants to get into horse racing and ends up with a team of underdogs who are also chasing their own dream. The first is trainer Tom Smith, who has a natural instinct to spot the capabilities of horses. The second is the horse Tom chooses for Charles, Seabiscuit, an unconventional choice as despite his pedigreed lineage, Seabiscuit is small at fifteen and a half hands tall with a slight limp. But Tom can see something in Seabiscuit’s nature to make him a winner, if only Seabiscuit can be retrained from his inbred losing ways. And third is the jockey they decide to hire, Johnny “Red” Pollard, so nicknamed because of his hair color. Like Tom, Red has always shown a natural way with …
Written by
Huggo
User Reviews: After the American Depression, the millionaire Charles Howard (Jeff Bridges) gets married again with Marcela (Elizabeth Banks) and decides to invest in a race horse. He gathers the old couch Tom Smith (Chris Cooper), the problematic jockey Red Pollard (Tobey Maguire) and the horse Seabiscuit, all of them losers, and he believes on them, giving a second chance to them. Seabiscuit becomes a winner and legend in a difficult period of the American life. "Seabiscuit" is a beautiful film with positive and wonderful messages. Charles Howard has the best lines, such as: "When the little guy doesn’t know that he is little, he is capable of big things"; or, "Sometimes all somebody needs is a second chance". The excellent and underrated actor Chris Cooper has probably his best performance along his career. Although having 141 minutes running time, the viewer does not feel time passing. I particularly liked not only the direction, performances, locations and reconstitution of a period, but mainly the never corny and very positive messages in the excellent lines and screenplay. My vote is eight.