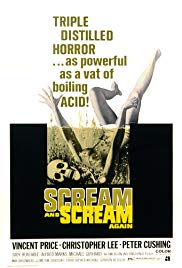 Storyline:
In London, a serial-killer drains the blood of females and the Detective Superintendent Bellaver and his team are hunting down the so-called Vampire Killer. Meanwhile in an undefined country that lives a military dictatorship, the cruel Konratz is climbing positions killing The Power that Be. When the Vampire Killer flees from the police, he seeks refugee at the real estate of scientist Dr. Browning and jumps into a tank of acid. Dr. David Sorel is intrigued with the powerful acid and decides to get a sample. He finds the truth about the research of Dr. Browning.
Written by
Claudio Carvalho, Rio de Janeiro, Brazil
User Reviews: I had missed a viewing of SCREAM AND SCREAM AGAIN (the title itself is fairly ludicrous, I must say) when I was a kid, shown on Italian TV as part of a one-night Vincent Price marathon. Having now watched the four AIP films made by director Gordon Hessler, I think that this is probably his best work.

It has a rather audacious non-linear narrative for a ‘mainstream’ horror film, though it all comes together neatly in the end. It is also the only one of the four films to take place in ‘our’ times despite the old-fashioned trappings of the plot (taking in espionage in the form of dictatorial regimes with their Nazi-like villains, as well as the obligatory mad scientist and his vampiric ‘creations’), the modern-day setting is indeed very appropriate and John Coquillon’s typically elegant cinematography captures its essence quite well.

SCREAM AND SCREAM AGAIN is virtually a black comedy which, mercifully, does not descend into camp: it is quite convoluted, relatively protracted (maybe this was because I watched it back to back with THE OBLONG BOX {1969}!), but wholly likable for all that. David Whitaker’s ‘unusual’ pop score is another major asset.

Like the earlier film, SCREAM does not take advantage of having three great horror stars together for the first time. Peter Cushing, graceful as always, does not share any scenes with Vincent Price or Christopher Lee, and indeed appears all too briefly. Price is effective as the mad scientist, even if the material itself didn’t seem to inspire him all that much (he later admitted to not ‘getting’ it!). Lee, perhaps the most progressive-thinking horror star (let’s not forget he appeared in Jess Franco’s EUGENIETHE STORY OF HER JOURNEY INTO PERVERSION that same year!), is perfectly authoritative as the true villain of the piece.

We also get an exciting if over-extended chase sequence in which Michael Gothard finds new (and highly impractical!) means of eluding the Police – in the shape of sarcastic Superintendent Bellaver who, as played with a rather heavy British accent by Alfred Marks, manages any number of amusing scenes (designed, perhaps, to relieve the audience’s frustration at the many – and apparently disjointed – strands of plot going on all at once)!

The end result is patchy overall certainly not everything in this pot-pourri of ideas works to our general satisfaction (particularly Marshall Jones’ overbearing characterization of Konratz) – but the film is often ingenious and weird enough to keep one’s interest at all times. In retrospect, the great Fritz Lang’s (reported) appreciation of SCREAM AND SCREAM AGAIN is actually not very hard to understand, as the material is indeed well up his street!

Reading about the film on the Net, I came across a rather disconcerting post over at Mobius where it was stated that the print utilized for the DVD was cut. Here is the relevant quote in full:

‘On SCREAM I am convinced there was extra footage in the UK theatrical release (which I saw) that has now vanished and was not restored in the MGM DVD. This consists of (a) Alfred Marks bringing down Michael Gothard in the quarry by throwing a stone that hits him on the head, which is the reason he falls down (b) at the climax, there was originally more footage and some more dialogue between Lee and Price – there is a fairly obvious music track change on the DVD where this should be.’

Is anybody here able to confirm this, or at least shed some more light on the matter?

Storyline:Inspired by director Elliott Hasler's great-grandfather's own experiences, 'Charlie's Letters' depicts an escaped British POW's epic battle for survival whilst on the run in war-torn Italy, as his wife and y...

Storyline:With a million species at risk of extinction, Sir David Attenborough explores how this crisis of biodiversity has consequences for us all.User Reviews: In the UK. Take a look at what you have in regards to p...

Storyline:Following the Civil War, Confederate Captain Justice Cain has retired to a quiet life with his young son and black wife. However, the men of his old outfit, known as Cain's Cutthroats, have turned to lives o...