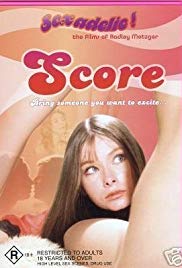 Storyline:
A happily married bisexual swinging couple, Jack and Elvira who spend their days lounging around the villa making bets and having sex. One weekend, they turn their sights on a couple of naive newlyweds, Betsy and Eddie and bet on whether or not they can seduce the two. Their small get together at their luxury Riviera villa turns into a night of secrets, seduction, and sexual discovery like no other. Elvira and Jack depict bisexuality perfectly as a swingers couple, having sex with each other as well as members of the same sex. When it comes to our naive newlyweds, Eddie is clearly a closeted homosexual and Betsy undoubtedly wants to be more than friends with Elvira while still maintaining an interest for the men in her life. Jack and Elvira allow these young partners to achieve a sexual liberation – regardless of sexuality.
Written by
lament
User Reviews: This is a pretty good movie but I’m not exactly sure who it was aimed at. Straight guys that want to see the gorgeous Lynn Lowry in hot, sapphic action might be tempted to watch it, but they will no doubt be left pretty jarred by the way Metzger intercuts the gay and lesbian sex scenes at the end. I would think the (in some versions hardcore)gay footage might ruin the mood a little for heterosexuals. There is a good softcore hetero scene at the beginning between Claire Wilbur’s character and a TV repairman while Lowry’s character looks on, but if you just want to see Lowry and/or a lot of heterosexual and lesbian sex you might do better with the contemporary cult film "Sugar Cookies" which features her and a young Mary Woronov. Gays, on the other hand, probably won’t relate too much to a movie about swinging married couples, although they will no doubt find it pretty funny how obviously gay the two "husbands" in this movie are to begin with (especially Lowry’s husband played by gay porno actor Casey Donovan). That leaves swinging bisexual types like the characters in the film (although I imagine those kind of people don’t have too much time to watch movies)and weirdos like me who don’t really watch sex movies for the sex (and there can’t be too many of us around).

Storyline:A mysteriously linked pair of young women find their daily lives preempted by a strange boudoir melodrama that plays itself out in a hallucinatory parallel reality. Written by David Watson &l...

Storyline:Mouse and Bird are a couple of sassy and sexy young hitchhikers who embark on a cross country trip in search of freedom, excitement, and independence. The lovely ladies use their bodies as currency and encou...

Storyline:A bunch of lazy and unmotivated schoolgirls are thrown into the extracurricular music club of their school and not exactly voluntarily. They are trying to cut out the hard stuff - yes, mathematics - and beco...

Storyline:Lady Snowblood (Shurayuki-hime) is caught by the police and sentenced to death for her crimes (in Lady Snowblood I). As she is sent to the gallows she is rescued by the secret police who offer her a deal to ...

Storyline:The Earth is threatened by an alien race who kidnap and kill humans and even animals and and use them for their body parts. In the year 1980 S.H.A.D.O. (Supreme Headquarters Alien Defence Organization), a hi...

Storyline:This Lupin the Third movie is set before he meets Daisuke Jigen, Goemon Ishikawa, or Fujiko Mine. It starts out with Lupin meeting a cute girl, who's on her way to being locked up. Lupin busts her out, only ...

Storyline:Scaramanga is a hitman who charges one million dollars per job. He becomes linked to the death of a scientist working on a powerful solar cell, and James Bond is called in to investigate. As he tracks down S...

Storyline:After a tied 1st place in a local stunt race, two drivers start a contest to decide who of them will own the prize, a dune buggy. But when a mobster destroys the car, they are determined to get it back.User ...