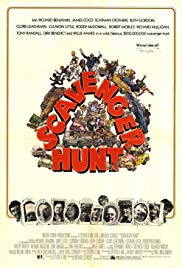 Storyline:
Milton Parker has made millions inventing and selling games. Upon his death, his relatives and domestic staff gather for the reading of the will. However, Old Mr. Parker is a game player to the last, and his will stipulates that a Scavenger Hunt will be held to determine the beneficiaries of his sizeable estate. The winning team gets all the money, the rest get nothing.
Written by
Afterburner <[email protected]>, [email protected]
User Reviews: Boy oh boy, it would seem as though this movie is particularly devisive. Every other comment was love it or hate it, so you’ve got to hand the movie that much. It really polarizes audiences. Let me offer this thought, ever since "It’s a Mad Mad Mad Mad Mad Mad World" it seems like once a decade we get the cameo-fest group goof movie. The formulas work like this: In it’s a Mad Mad Mad Mad Mad Mad World a group of people race to dig up a dead gangster’s loot; Then in Scavenger Hunt a group of people race to win their inheritance; Then in Million Dollar Mystery a bunch of people race to dig up Tom Bosley’s Glad Bag fortune (this movie was, thus far, the stinkiest); Next we look forward to Rat Race where a bunch of teams race for a casino owner’s chunk o’ change. That’s the general rundown. All of these movies build on the same plot, some better than others. At least Scavenger Hunt was self-aware of how goofy it was. I mean, Mad Mad World was totally brilliant, but worthy of an update. Million Dollar Mystery was comprised almost entirely on C-list actors, no offense to Eddie Deezen (The nerdy guy). And I won’t venture a guess on Rat Race until I’ve seen more press on it, but I’m not holding out too much hope. Basically what I’m saying is that Scavenger Hunt is a good whole-family Sunday afternoon crowded around the tube and wasting 90 minutes type of movie. It was pre-PC so it plays up some stereotypes, which I think is great, and I’ve always thought that Richard Benjamin was underrated as a comic actor. Love it or hate it, you should give this movie its due. It’s not the worst in a series of bad.