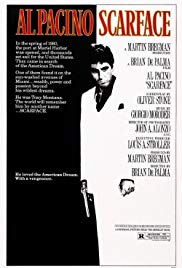 Storyline:
Tony Montana manages to leave Cuba during the Mariel exodus of 1980. He finds himself in a Florida refugee camp but his friend Manny has a way out for them: undertake a contract killing and arrangements will be made to get a green card. He’s soon working for drug dealer Frank Lopez and shows his mettle when a deal with Colombian drug dealers goes bad. He also brings a new level of violence to Miami. Tony is protective of his younger sister but his mother knows what he does for a living and disowns him. Tony is impatient and wants it all however, including Frank’s empire and his mistress Elvira Hancock. Once at the top however, Tony’s outrageous actions make him a target and everything comes crumbling down.
Written by
garykmcd
User Reviews: In 1983, Director Brian De Palma set out to make a film about the rise and fall of an American gangster, and that he did– with the help of a terrific screenplay by Oliver Stone and some impeccable work by an outstanding cast. The result was `Scarface,’ starring Al Pacino in one of his most memorable roles. The story begins in May of 1980, when Castro opened the harbor at Mariel, Cuba, to allow Cuban nationals to join their families in the United States. 125,000 left Cuba at that time, for the greener pastures of freedom in America, and most were honest, hard-working people, thankful for the opportunity they had been granted. But not all. Among the `Marielitos’ who streamed into Florida, approximately 25,000 had criminal records and were nothing less than the dregs of Cuba’s jails– criminals considered beyond redemption, who Castro had merely wanted to be rid of. And they, too, saw America as a land of opportunity, even as Al Capone had considered Chicago some fifty years earlier. And among the most ambitious was a man named Tony Montana (Pacino), known to his associates as `Caracortada.’ Scarface.

Now that he was free of the yoke of Communism under which he had grown up, Montana wanted what he felt was coming to him, and he wanted it now; and from the moment he stepped off the boat in Florida, he was determined to have it all. Wealth and power– that was Montana’s dream, and he would get it by doing what he did best, beginning with a favor for a man living in Miami by the name of Frank Lopez (Robert Loggia). Lopez, it seems, had a brother in Cuba who had met an untimely end at the hands of one of Castro’s goons, a man who, having outlived his usefulness to Castro, had been summarily discarded and was currently being held in `Little Havana,’ along with Montana and all of the Cubans just off the boats, where they awaited their papers from the government that would effect their transition into their new lives. And in short order, Montana sees to it that Lopez’s brother has been avenged, and it sets the stage for his own entrance into the underworld of America.

Lopez, a wealthy businessman with the right connections, in return for the favor gets Montana and his friend, Manny (Steven Bauer), released from the holding camp, and puts them to work. In his day, Capone may have had bootlegging as a means through which to line his coffers with illicit gain, but Lopez has the modern day equivalent, and it’s even more lucrative: Cocaine. Lopez takes Montana under his wing and indoctrinates him into the life, but once he has a taste of it, Montana isn’t satisfied with whatever crumbs Lopez sees fit to throw his way, and he sets a course that will take him to where he wants to be: At the `top.’ With a cold-blooded, iron will, Montana decides he’ll do whatever it takes to get there, no matter what the cost. but before it’s over, he will realize the price for his dream, and he’ll pay it; but for a brief moment, perhaps he will know what it’s like to be The Man. And he will also know whether or not it was worth it.

In step with De Palma’s vision, Pacino plays Montana larger-than-life, and he does it beautifully. From the accent he affects (which he researched thoroughly to make sure he got it right– and he did), to the body language and the attitude, he’s got it all, and it makes Montana convincing and very real. What he brings to the role is nuance and style, in a way that few actors (De Niro would be one) can. This is definitely not a character that is sympathetic in any way, nor is there anything about Montana that you can readily relate to on a personal level; but Pacino’s screen presence is so strong that it makes him a thoroughly engrossing character, even though it’s hard to become emotionally involved with him. It’s quite simply a dynamic, memorable performance.

Michelle Pfeiffer gives a solid performance, as well, in the role that put her on the path to stardom. As Elvira, the woman who becomes an integral part of Montana’s dream, Pfeiffer is subtle and understated, giving that sense of something going on underneath, while affecting a rather cold and distant exterior countenance. She, like Pacino, definitely makes her presence felt as she fairly glides across the screen with a stoic, enigmatic and sultry demeanor.

The supporting cast includes Mary Elizabeth Mastrantonio (Gina), Miriam Colon (Mama Montana), F. Murray Abraham (Omar), Paul Shenar (Sosa) and Harris Yulin (Bernstein). An excellent precursor to the more recent and highly acclaimed `Traffic,’ and `Blow,’ and well as having a climactic scene reminiscent of Peckinpah’s `The Wild Bunch,’ De Palma’s `Scarface,’ originally panned by critics, has since been cited by many as being the definitive American gangster saga. Much of the violence is implied rather than graphic, but this film still has an edge of realism to it that many may find somewhat disturbing. But if you stay with it, there is a lesson to be learned in the end. And like many lessons in life, the most valuable are often the hardest to take at the time. But the reward is always worth it, and that’s the way it is with this film. I rate this one 8/10.

Storyline:Alan Wong (Andy Lau) is a Hong Kong youth who is bent to climb up the social ladder. With the help of a foreign businessman's mistress and mixed ethnicity woman Erica (Carroll Gordon), he joins a real estate...