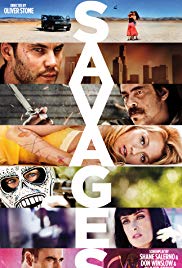 Storyline:
In California, the former Navy SEAL Chon and his best friend, the peaceful botanist Ben, are successful entrepreneurs producing and dealing high-quality weed. Chon brought seeds from Afghanistan and Ben used his knowledge to develop the best marijuana in the country. Chon and Ben share the pothead lover Ophelia and she loves both of them since they complete each other – Chon is a powerful and strong lover and Ben is a sensible and loving lover. Their comfortable life changes when the Mexican Baja Cartel demands a partnership in their business. Chon and Ben refuse the deal and the leader of the cartel Elena sends her right-arm in America, Lado, to abduct Ophelia to press the American drug dealers. Chon and Ben ask the support of the dirty DEA Agent Dennis and get inside information to begin a secret war against the Baja Cartel to release Ophelia.
Written by
Claudio Carvalho, Rio de Janeiro, Brazil
User Reviews: It was OK enough—it was definitely well directed–but the film would’ve benefited a lot from three better actors in the central roles. Don’t get me wrong–its not that Taylor Kitch or Aaron Johnson aren’t decent enough–both play their roles with exactly the same kind of stiffness that i guess suit their characters’ circumstance but neither really add anything beyond what the screenplay has already provided them.. like if this were made say 10-15 years ago and you’d of had Steve Zhan and Ben Affleck in it i’m not saying it would’ve been batter but the two of them would’ve made you care for what might happen to the main characters a bit more i feel like. I’d rather not get into the lack of any kind of convincing emoting from Blake Lively here— (She’s supposed to be afraid for her life here–and somehow its like she’s barely miffed—its as if instead of her life that’s being threatened its her wi-fi connection.) having read the book this was based on–the character O in the story was a lot more resourceful and a lot more crazy then Blake Lively ever suggests in the two hours of running time—would that they had cast literally anybody else in her part,just off the top of my head would Lauren Ambrose from six feet under have been considered too old??? would Krysten Ritter??? would Kirsten Bell?? hell Alexis Bidel might of been able to pull this off better (and as much as i love Rory Gilmore emoting was never exactly her strong suit) at least Blake Lively’s narrating was OK…i just really wish they could’ve found someone who could have really put this movie over the top here. God again if this was made like 10-15 years ago–imagine what a younger Juliette Lewis or a younger Illeana Douglas could’ve done with this.

That’s really all i actually wanted to say cause everything else was fine enough–i was kind of expecting it to be more over the top if anything given that its Oliver St one’s first crime film in a little while but its definitely over the top enough to satisfy anyone looking for an over the top crime movie. Its good enough that it overcomes the somewhat major obstacles in its path to keep you watching and keep you entertained but again with a little different casting–this could of been first rate.

Astérix and Obélix: God Save Britannia (2012)

Storyline:The year is 50 B.C. Caesar is hungry for new conquests. At the head of his glorious legions he decides to invade the island that lies at the very edge of the known world, that mysterious land known as Britai...