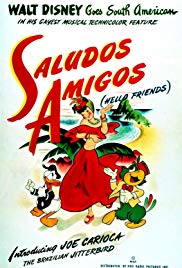 Storyline:
Live-action segments show members of the Disney staff touring South America and recording their impressions in sketches. These segue into four animated sections: “Lake Titicaca” depicts tourist Donald Duck’s troubles with a stubborn llama; “Pedro” tells of a little mail plane’s adventures flying over the treacherous Andes; “El Gaucho Goofy” transplants an American cowboy into the Argentine pampas; and in “Aquarela do Brasil,” Jose Carioca shows Donald the sights and sounds of Rio de Janiero.
Written by
Paul Penna <[email protected]>
User Reviews: ALTHOUGH THE EFFECT of this animation/live action hybrid was less spectacular than Disney’s other efforts, such as SNOW WHITE, FANTASIA, BAMBI and DUMBO; it certainly was a success. Both at the Box Office and in critical praise, SALUDOS ANIGOS was adjudged a winner; both domestically and in the overseas marketplaces.

SUCCESS IN THE third area of its reasons for existence were even more overwhelmingly effective than had been anticipated by anyone. The behind the scenes genesis of the film was an alliance between Disney and the United States Department of State. Presents us with a most perfect example of collaboration between the Private Sector and the Public in the form of the U.S. Federal Government, Roosevelt Administration.

UNLIKE MOST SUCH experimentations, this one worked and paid big dividends for both parties.

IN MMAKING SHORT work of a long story, the State Department underwrote a good will tour by Walt and a group of his artists, musicians and writers. The tour was of South America with stops in Brazil, Argentina, Bolivia, Peru, Chile and some others. The purpose was two fold. One being as a sort of bulwark against the growing fascination with Fascism on the Conytinent; with the other’s being an extended junket by the Disney Company in discovering the customs, manner of dress, language, literature and music of the many countries and regions of South America. Both ends were highly successful.

THE SCENARIO FOLLOWS the real life tour of the Disney crew and uses the tour by airplane as the link between four animated segments. The first finds American tourist, Donald Duck, replete with faithful camera, visiting the Bolivia-Peru border at Lake Titicaca. The second finds a story very much like LITTLE TOOT (the tugboat); but has at its center a family of anthropomorphic airplanes whose job is to fly the mail over the Andes Mountains. The third examines how the Argentine Gaucho is the South American equivalent of the Cowboy of the Old West. Segment four brings Donald Duck to Rio de Janero in Brazil; where he meets and interacts with Portuguese speaking Parrot, Jose Carioca.

ONE FURTHER OBSERVATION which we found was regarding the format that they used in framing the individual story segments. As a central dramatic device, Disney chose that of the touring artisans being moved about the continent from one country to another their charter airliner; much in the same manner that the real tour did.

THE FICTIONAL MOVIE flight reminded us of our 4th grade geography book. In it one character "Peter Martin" was privy to his father’s trans-global flight in which the two (along with us 9 year olds) visited all of the continents save for Antarctica.

THE GREAT STORY of behind the scenes story of SALUDOS AMIGOS and its sequel, THE THREE CABALEROS, is told in the 2008 documentary film, WALT & EL GRUPO.

Storyline:After his father is killed in a car accident, things unravel for Kale Brecht and he is placed under house-arrest for punching his Spanish teacher. Having nothing better to do, Kale occupies himself by spying...