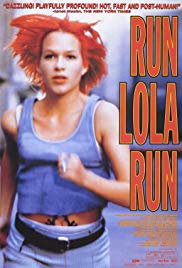 Storyline:
Lola receives a phone call from her boyfriend Manni. He lost 100,000 DM in a subway train that belongs to a very bad guy. Lola has 20 min to raise this amount and meet Manni. Otherwise, he will rob a store to get the money. Three different alternatives may happen depending on some minor event along Lola’s run.
Written by
Claudio Carvalho, Rio de Janeiro, Brazil
User Reviews: Lola rennt or Run Lola Run as we say it, is a German thriller written and directed by Tom Tykwer. This Film will contrast your emotions as it shows you how one little event in somebody’s life can change there’s, and other peoples lives forever. This rollercoaster ride of emotions will keep you gripped all the way through as it jumps from soft, dimly lit emotional scenes, to the completely contrasting scenes of running and constant action.

The music used in this film complements the scenes very well, when it’s a slow scene our ears are graced with soft classical music like when Lola is falling to the ground in a slow motion shot. The complete opposite of this is used in the fast paced running scenes, as we get pounded by constant techno beats. I believe that the director has used techno to try and get us inside Lola’s head as she is running and stressing about Manni and all the other events that happen throughout this amazing film.

Lola’s Determination to save her boyfriend Manni is very well projected as she enters the bank that her father runs, and throughout the three different versions of the story uses different techniques to try and save him. This involvement with the characters and the three different storylines is very unique to this style of film. I think that the actors have delivered a very memorable and exciting performance which will leave viewers wanting to watch the film over and over again.

I think that this director has used this style of film very well, he is one of this first to successfully use this style and create a very interesting and exciting film. This film is almost the only one of its kind, other than the film ‘Sliding Doors’ but even in that the character is living two parallel lives but in this film it is replayed over again.

This film used interesting techniques that I had never seen in a film before. I think that the snapshots into the peoples lives gave you a good view of how one little event can change your life forever. By replaying through the same sort of events three times the director lets you really get a sense of feeling for the characters, especially Lola and as the film progresses you actually start to care about the characters and I think this was a really good quality in the film.

Overall I really enjoyed this film, and think that it is one of the best foreign films I have seen in a long time, and would give it a 9/10.

Storyline:The sequel to The Visitors reunites us with those lovable ruffians from the French Medieval ages who - through magic - are transported into the present, with often drastic consequences. Godefroy de Montmirai...

Storyline:Andrea Marr is a bright, straight-A, mature, 18-year-old high school senior on the verge of womanhood who decides to abandon her sheltered, boring lifestyle and her bookish friend Darcy for a look into the l...