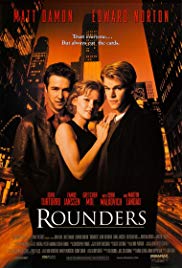 Storyline:
John Dahl directed this exploration of New York private clubs devoted to high-stakes poker, with first-person narration from the film’s central figure, law student Mike McDermott (Matt Damon), who loses his entire savings to Russian club owner Teddy KGB (John Malkovich). Mike then turns away from cards, devoting his attentions to his law studies and his live-in girlfriend Jo (Gretchen Mol), who’s concerned when Mike’s former gambling buddy Worm (Edward Norton) is released from prison. She has good reason to worry, since it takes Worm only a matter of minutes to draw Mike back into poker action. When she learns Mike has returned to the poker clubs, she moves out, and Mike begins to lose interest in his studies. Worm has a prison debt, and the threatening Grama (Michael Rispoli) wants the money. Mike not only indulges the irresponsible Worm, he gets involved in Worm’s debts. When Grama demands $15,000 on a five-day deadline, the two buddies go into high gear with a non-stop, no-sleep …
User Reviews: Rounders is I believe, one of the most widely underrated movies of our time.

I first saw this movie as it was a ‘bonus DVD’ thrown in for free with my DVD player back in 2000, so naturally I didn’t expect much (as the other bonus DVD’s were very mediocre), but what I found was a very enjoyable movie.

At that stage in my life, I had only played a little poker as a child growing up, and never ‘Texas Hold’em’ so to be honest, a lot of the terminology went ‘over my head’, but even so, the film became an instant favorite of mine purely because of the performances.

The film has so much star power, and yet none of the fine actors try to ‘steal’ scenes. Damon, Norton, Malkovich, Landau … and then the fine supporting cast of Turturro, Jansen, and Mol.

In fact, there is a scene with Martin Landau and Matt Damon that is perhaps one of the most beautiful performances I have seen in a long time between two very fine actors.

So even if you’re not a poker player, the story is tighter than a lot of Hollywood ‘pop fluff’ and the performances alone can sell the film as an enjoyable movie capable of multiple viewings.

But … if you start playing poker and get really into what they are talking about, and reading about poker theory (like Doyle Brunson’s book Super System) then the movie moves up to a whole different level.

A lot of the time, Hollywood will attempt to cover a specialized error, and usually fail, or at best only partially succeed, whereas Rounders managed to get everything ‘spot on’, just look at the US DVD, it has a commentary track from 4 World Champion Poker players, if that’s not a stamp of approval then I don’t know what is.

When you factor in how the film can be enjoyed by someone who has little to no idea about Poker (as I did when I first saw the film) just because of the tight story and stellar performances and also be ‘immortalized’ by poker enthusiasts as the best movie ever made on the subject (and truth be told, a big reason why the World Series of Poker has been doubling it’s entries year after year) … what you have here is a true gem that works on so many levels and what I believe is, as I said initially, one of the most widely underrated movies of our time.

Storyline:In the walled city of Thneed-Ville, where everything is artificial and even the air is a commodity, a boy named Ted hopes to win the heart of his dream girl, Audrey. When he learns of her wish to see a real ...