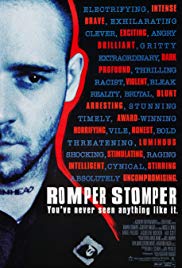 Storyline:
Nazi skinheads in Melbourne take out their anger on local Vietnamese, who are seen as threatening racial purity. Finally the Vietnamese have had enough and confront the skinheads in an all-out confrontation, sending the skinheads running. A woman who is prone to epileptic seizures joins the skins’ merry band, and helps them on their run from justice, but is her affliction also a sign of impurity?
Written by
Ed Sutton <[email protected]>
User Reviews: Firstly, I’d like to start by saying that anyone who thinks this is somehow pro-racist or pro-skinhead has REALLY missed the point, thats if they’ve even seen it,that is. That would be like saying ‘Saving Private Ryan’ glorifies war, or ‘Trainspotting’ glorifies drugs.

It revolves around a bunch of lawless Australian skinheads, as they party to loud skrewdriver-esquire music, drink, fight (amongst each other as well as against the Vietnamese immigrants living nearby), cause mayhem..and so on so forth. They are living in a dilapidated old garage and scrounge off the system whilst hating it. They are portrayed as hopeless, angry lost kids held together by a psychopathic and violent leader;Hando Where to start with Hando, seriously, this is undoubtedly Russel Crowe’s most unforgettable performance. Whether its his tattoo’s, shaved head, unshaven face or cold eyed glare…you can’t help but be drawn in by Hando. He is by far the most relentless and ruthless member of the gang, and during the film you wonder whether or not they’d even exist without him.

During the film, things take a turn for the worse, actually they take several turns for the worst…which has an increasingly negative effect on the gang.

I rated this film a 9, as it achieves what it sets out to do. Give the viewer a no-holds barred trip into the destructive lives of social outsiders, and the violence and hatred that follows. Not easy viewing, but I recommend this film to anyone who likes their movies gritty and upfront.

Storyline:As tensions of apartheid spread across South Africa, many students revolts to massive stone throw, a demonstration that comes in a wake of the introduction of Afrikaans language as a means of teaching. This ...