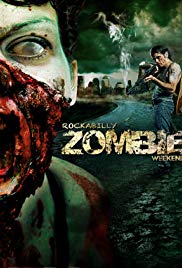 Storyline:
The film is called Rockabilly Zombie Weekend and it takes place in Central Florida in a modern day setting. A young couple plans to have a rockabilly themed wedding out at the old farm, despite warnings of a West Nile Virus outbreak. Things go horribly wrong when the virus spawns zombie-creating mosquitoes, who are feeding on the wedding guests as well as the other locals of course!
Written by
Tammy Bennett
User Reviews: I guess it’s okay if you like regurgitated zombie garbage. You could probably find a better zombie movie on YouTube by some 13 year old kids. As a matter of fact, look up Nazi Zombies In Real Life, watch it, and see how it stacks up to this. Go ahead, I’ll wait.

So much better than this, right? And really, that’s the problem with a lot of these awful zombie flicks. All the audience seems to care about is what kind of guns are going to be used, or how well stocked on beef jerky the theater’s going to be, and that’s what these directors cater to. This seems no different than The Walking Dead, or Zombieland, or the upcoming World War Z movie. These sorts of movies are made to appeal to the lowest form of movie goer there is. It’s the kind of movie you have playing in the living room while you’re hanging out, drinking beer, and talking about work. That is to say you’re going to get more entertainment from your friends and your alcoholic beverage than you are going to get from this movie. I honestly wish I could tell you it’s going to be different, but it’s not. All you need to know is that some guy and some girl are getting married, and they seem to be a trailer trash couple that wants some sort of big fat redneck wedding (as if there aren’t enough of those in America), then OOOH, ZOMBIES, then guns, then a bunch of fat old guys acting like bad-asses, then wham. It’s over, and you’re just kind of left telling yourself, "oh God, I could have been using that hour to feed the needy or volunteer at an animal shelter or do something productive instead of wasting my time with this." Even if it is an indie film, even if the director had no money or a solid cast, that doesn’t excuse the fact that it’s just some mediocre gory film that tries to get its thrills solely from shock value.