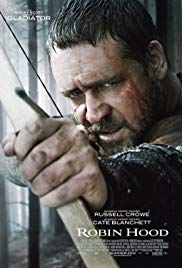 Storyline:
Birth of a legend. Following King Richard’s death in France, archer Robin Longstride, along with Will Scarlett, Alan-a-Dale and Little John, returns to England. They encounter the dying Robert of Locksley, whose party was ambushed by treacherous Godfrey, who hopes to facilitate a French invasion of England. Robin promises the dying knight he will return his sword to his father Walter in Nottingham. Here Walter encourages him to impersonate the dead man to prevent his land being confiscated by the crown, and he finds himself with Marian, a ready-made wife. Hoping to stir baronial opposition to weak King John and allow an easy French take-over, Godfrey worms his way into the king’s service as Earl Marshal of England and brutally invades towns under the pretext of collecting Royal taxes. Can Robin navigate the politics of barons, royals, traitors, and the French?
Written by
don @ minifie-1
User Reviews: This is not exactly Robin and his merry men, nor is this Errol Flynn swashbuckling and laughing his way through merry old England as he gets his jollies battling the sheriff of Nottingham. No, this particular take on the story of Robin Hood is very different – like none you’ve ever seen before. Even the historical setting is changed from what’s usually offered. Here, rather than waiting out the evil regency of Prince John and his minions until King Richard returns from the Crusades, Richard is already dead. His death comes very early on in the movie in battle in France. John is the King of England in this movie, and rather than an unselfish "robbing the rich to give to the poor" type character, Robin (actually in this movie Robin Longstride, who finds himself impersonating Robert of Locksley and becomes known as "Robin of the Hood") is a more complex character. I wouldn’t say exactly noble – especially in the beginning – and his battle is not so much for the poor as it’s a battle for the "rights" of the English people, as he eventually takes on what seems to be the fight to get John to sign what I assume is Magna Carta, and at least temporarily has to ally himself with John to help lead the defence of England against a French invasion.

The different historical setting is a bit disorienting to be honest – especially at first – but it also gives a degree of unpredictability to what’s going to happen, and once you get a sense of where you are, when you are and what the fight is about it’s easy enough to understand what’s going on. Russell Crowe did a commendable job, I thought, in this alternate portrayal of Robin, and Cate Blanchett was most certainly a different kind of Marion. She’s not the Maid Marion of legend. She’s tough, she’s a fighter, she goes into battle with the French – although not leading the battle, there’s almost a Joan of Arc quality to her (minus the voice of God.) I was quite taken with Oscar Isaac as King John. He took the part and made it real. John came across as I would expect him to from the historical record – shifty and conniving, untrustworthy, quite willing to make and break whatever alliances are necessary at any given moment to ensure his survival as King and sometimes quite befuddled by his responsibilities. Perhaps a weakness was the fact that there was no real focus on Robin’s men. Really only Will Scarlett (played by Scott Grimes) and Friar Tuck (played by Mark Addy) were significant elements in the story, and even they weren’t particularly important.

The sets and setting were good. This felt like I imagine England in the late 12th-early 13th centuries would have felt like. Rough, brutal, dirty. It worked for me. The battle scenes (and there are a lot of them) are very well done. Since the movie ends with the caption "And so the legend begins" one wonders if a sequel might be in the works, perhaps detailing the struggle leading up to the actually signing of Magna Carta? If so, I’d definitely watch it. This was quite good! (8/10)