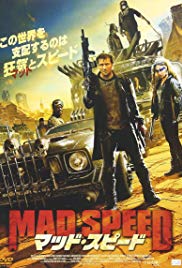 Storyline:
When an amnesiac wakes up in a post apocalyptic world ravaged by a rabies type virus, he must band together with a small group of survivors.
User Reviews: A man approaches a group of survivors in an apocalyptic world. They wing him with a shot and are surprised to find him a normal human suffering from amnesia. Water is scarce. It hasn’t rained since forever and the group guards the only known source of clean water. The world is overtaken by viral zombies which come out at night to attack. The amnesic man may actually be immune from the zombie virus and possibly the salvation of the human race. Nakada has smuggled in her infected boyfriend Kevin.

This is a Road Warrior wannabe. It’s noticeable that I don’t know many of their names. These characters are one dimensional and expandable. It’s a cheap exploitation B-movie done without the fun exploitation. Somebody dressed up a few vehicles and had some fun playing Road Warrior. It isn’t much more than that.