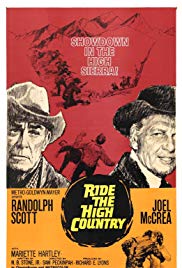 Storyline:
Aging ex-marshal Steve Judd is hired by a bank to transport a gold shipment through dangerous territory. He hires an old partner, Gil Westrum, and his young protege Heck to assist him. Steve doesn’t know, however, that Gil and Heck plan to steal the gold, with or without Steve’s help. On the trail, the three get involved in a young woman’s desire to escape first from her father, then from her fiance and his dangerously psychotic brothers.
Written by
James Meek <[email protected]>
User Reviews: "In simple terms, Ride the High Country was about salvation and loneliness" – Sam Peckinpah

Both in their 60s at the time, Joel McCrea and Randolph Scott summed up their careers in Sam Peckinpah’s second film, Ride the High Country. After two hundred films between them, this was Scott’s final film and McCrea’s second to last. The film was shot in only twenty-six days and played mostly as bottom filler for double bills. It was only after winning first prize at the Cannes Film Festival that it began to be appreciated for the true classic it is. Set in the early days of the century, the days of the cowpoke are giving way to the modern modes of transportation and communication. People like lawman Steve Judd (Joel McCrea), with a reputation for fierce integrity may be obsolete in the New West but his dignity and strength of character make him a hero worthy of admiration.

The film is both a lament for the passing of the Old West and a gentle celebration of humanity’s search for friendship, honor, and trust. Both men feel they have somehow failed to live up to their standards and want one more chance to redeem their honor. Judd wants to recapture some measure of self-respect while Westrum looks for the material wealth that has always eluded him. As the film opens, Judd hires his ex-deputy Gil Westrum (Randolph Scott) to help him transport a shipment of gold bullion down from the high Sierras, a job in which six prior attempts ended in failure. Against Judd’s advice, they bring along a third man – a wild, womanizing youth named Heck Longtree (Ron Starr), who proves to them that he can handle himself in a fistfight.

Things get complicated when they spend the night at a farm run by puritanical Joshua Knudson (R.G. Armstrong) and Heck is taken with his beautiful daughter Elsa (Mariette Hartley). Feeling thwarted by her possessive and moralizing father, Elsa runs away with the trio hoping to find a miner, Billy Hammond (James Drury) who has promised to marry her. As they ride up into the hills, the cinematography by Lucien Ballard reflects the beauty of the West as it has rarely been seen. When they arrive, things go from bad to worse for Elsa. Preceded by a marvelously comic horseback parade in which the boys sing When the Roll is Called Up Yonder, she is married to Billy in a saloon presided over by an inebriated judge.

Unfortunately, she has to be rescued by Judd after Billy Boy plans to share his bride with his four redneck brothers on their wedding night. The wedding scene is shown from Elsa’s point of view and it is sympathetic and touching. On the way back with the gold, however, Gil turns on his old friend, plotting with Heck to steal the gold. In a famous exchange, Gil asks Judd, `Pardner, you know what’s on the back of a poor man when he dies? The clothes of pride. Is that all you want?’ To this Judd replies `All I want is to enter my house justified.’ When the travelers encounter the Hammond boys waiting to ambush them at the farm, both men must confront their deepest fears and their noblest truths.