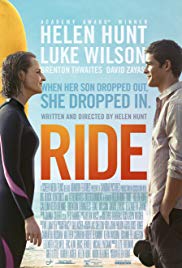 Storyline:
A mother travels cross-country to California to be with her son after he decides to drop out of school and become a surfer.
User Reviews: It is a 2nd directional feature for Helen Hunt. She also starred in a prominent role which is about a mother-son relationship. I don’t understand why it was rated very low, but I like this rare movie, which portrayed parent-children bond in an emotional way. Such kind of a beautiful film the last time I saw was the ‘The Guilt Trip’, I guess. Only the women filmmakers can make films like this.

Maybe this movie hit my weak point, I’m always sympathetic to the old people’s struggle. Anyway, I liked the Helen Hunt’s role and she was not struggling, but wanted to connect with her son who’s grown up and trying to stretch his wings to fly away from her. This is very usual in the real world, an affectionate father towards his daughter and the same to a mother towards her son. I find this kind of themes are very cute and touches me.

There’s nothing bad about the direction, but the screen writing. Helen Hunt is not a great writer, in some parts the film was very dry. Feelingless emotions, but overall keeping the prime target as a mother who’s pursuing her son for some reason. There were a few scenes that added the fun flavour to the movie.

I wanted to give more points it, but I can’t. Besides, I can recommend it to the people who’re interested to have a movie about the family issues. Not like couples having a quarrel, but between parents and their kids, like maybe similar to the one I mentioned in the first paragraph.